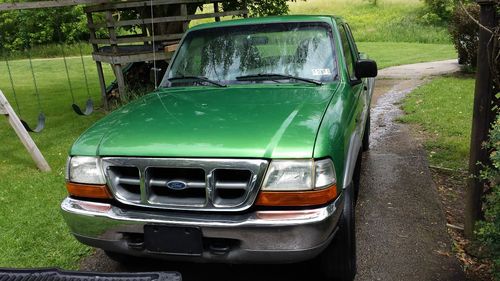 1999 Ford Ranger Pickup
4x43.0L V65 speedTruck body has 188850 miles. The engine was replaced with one with only 3,000 miles (yes 3,000 and I have the documentation to prove mileage). All gaskets and seals were also replaced. Does not leak any oil/fluidsNo check engine or warning lights onNew waterpumpNew plugs and wiresNew air filterFresh engine oil and antifreezeNewer shocksNewer brakes front and rearNewer sway bar end linksTruck runs and drives amazing. 4x4 works 100%. The clutch has about 10k miles on it. Transmission goes into gear as it should.Tires will need replaced since they are about shot. The A/C works; however will need recharged since it was disconnected to change the engine. Small amount of surface rust by the fender flares due to them rubbing the paint. There is also rust on the lower rocker panels. Couple dents by the rear bumper.Frame is solid with no issuesSerious inquires only. CLEAN TITLE IN HANDI drive this truck daily 75 miles to work and it has always been reliable