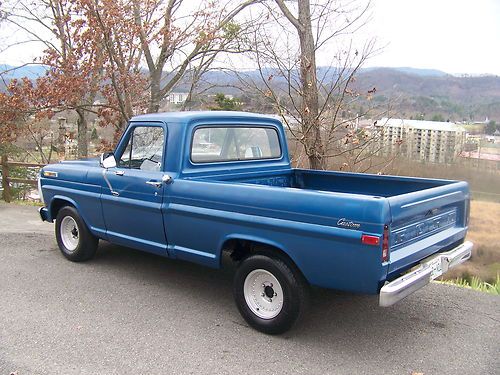 1970 FORD F-100 CUSTOM CAB PICK-UP TRUCK .  HAS 302 ENG. WITH 4 SPEED TRANS . BRAND NEW ALUMINUM RADIATOR , HOLLEY 600 CFM CARBERATOR AND HEADERS WITH 2 1/2 " FLOWMASTER EXHAUST WITH TURNDOWNS AND FORD RACING VALVE COVERS AND CHROME AIR BREATHER .  ALSO NEW FLEX FAN AND SPACER .  IT HAS A GT GRANT STEERING WHEEL AND A NICE FLOOR SHIFTER WITH T-HANDLE AND OIL , AMP , AND WATER TEMP GUAGES .  TRUCK HAS ALL GOOD GLASS EXCEPT WINDSHIELD HAS A CRACK IN IT .  TRUCK HAS GOOD BUMPERS FRONT AND REAR AND IS SITTING ON 4 ALUMINUM WHEELS AND 4 SUPREME P-235/R 15'S TIRES .  TRUCK HAS A STRAIGHT BODY AND IS IN GOOD CONDITION FOR A 43 YEAR OLD PICK-UP .  TRUCK IS TURN KEY AND IS A GOOD DEPENDABLE DRIVER .  THE FLOWMASTER EXHAUST REALLY SOUND GOOD .  TRUCK HAS A STRONG MOTOR .  SERIOUS INQUIRIES ONLY !!!  SALE OR TRADE !!!!