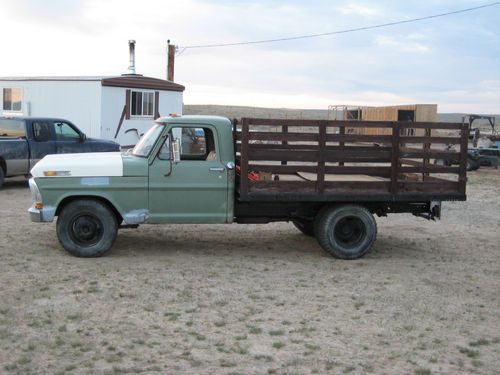 This is an old 1970 Ford 1 ton dually flat bed 2 wheel drive that I bought at an auction and was gonna make a rat rod out of it but things happen and change in life. LOL! It does run. I drove it home after I put a new fuel pump on it and cleaned out the carburetor. It has a 351 Windsor in it that sounds good and has good oil pressure. Its not the original engine I'm sure. 4 speed manual transmission.  Its got some pretty tall rear end gears in it cause it runs about 55 mph pretty comfortably. Not sure what gear ratio it is though. The body is rough but not as bad as many I've seen. The interior is just as rough. The tires are old and weather checked and wont make it far. It does need new tires. The wheels are split rings (widow makers). I think the truck would make a good work truck on the ranch or ?... The truck would make a neat rat rod I think. I do have a 1969 pickup box that can be purchased separate from this action. 200 bucks OBO. Give me a call or a text message if you have questions. 307 267-1041. I check my ebay pretty regularly so if you want to email thru ebay that's fine to. The buyer is responsible for all shipping arrangements, and charges. I can help with loading if needed. I do have it for sale locally so I will end auction early if it sales. Please bid to buy, not to play games. I do have a clear title to the truck. I have no idea on the actual mileage. No warranties or guarantees. Please call me with any questions. 307 237-1041