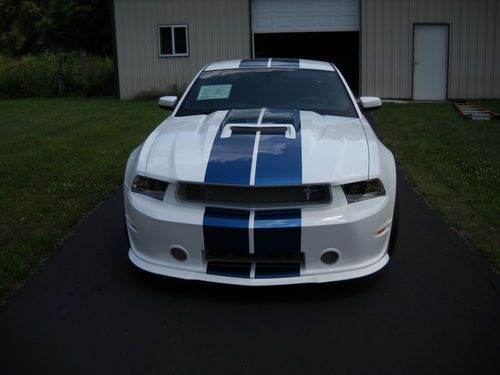 Up For Auction Is A 2011 Shelby GT 350, It Has 288 Miles On It And Is Pretty Much New, It Has A Supercharged Coyote 5.0 Liter Engine With 624 H.P. It Was Purchased At Friendly Ford In Las Vegas And Delivered To Shelby America For It's Conversion. It Has All The Shelby Options Available For The 2011 Model Year And Has A Signed Dash By Carroll Shelby And Has An Aftermarket Barton Shifter Shifter Installed. There Are No Blemishes Or Imperfections.!!  It Would Make A Nice Center Piece For A Collection.  I Am Listing This Car For A Friend So Call If You Need More Info. His Phone Number Is 574-269-6582  After  6pm Eastern Time ,. Thanks For Looking And Good Luck.