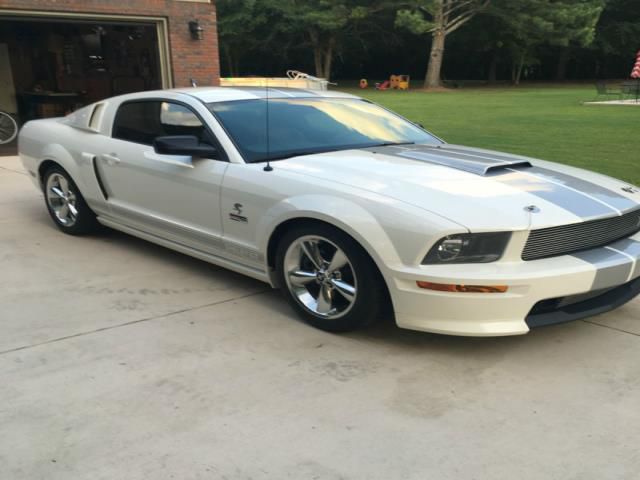 2007 FORD MUSTANG Shelby GT Performance White LIGHT GRAPHITE LEATHER INTERIOR ONLY 34,000 MILES BUILT BY SHELBY CSM# 07SGT2419 Vehicle Authenticity Certificate Official Shelby America Registry verified on May 26, 2015 SPECIAL Shelby FEATURES INCLUDE 2007 Ford Shelby GT Shelby GT Specs:4.6-liter V-8 w/325 horsepower and 330 lb-ft of torqueFord Racing Handling Pack Ford Racing Power Pack 18 wheelsHurst Short Throw ShifterOffered in Black and Performance White only w/Silver StripesUnique Front FasciaHood ScoopBrushed Aluminum GrilleShelby GT Logo Floormats and Sill Plate on Center Dashboard and Under Hood Shelby-inspired performance, proven by Ford Racing “The Shelby GT builds on the expertise of Ford Racing, the experience of Carroll Shelby and the Shelby team to deliver an incredible driving experience that is unmistakably Shelby,” says Jamie Allison, manager, Ford Racing Performance Group. “And, like every Shelby Mustang should be, the Shelby GT is ready to be both a weekday driver and a weekend warrior for track days.” The Shelby GT driving dynamics are fine tuned with the Ford Racing Handling Pack, which was developed by the same engineers that developed the Ford Racing FR500C, which won the 2005 Grand-Am Cup Championship. New coil springs drop the overall ride height by an inch-and-a-half for a more aggressive stance and reduced body roll. Stiffer dampers and front swaybar further enhance cornering feel and body control. To showcase the key performance modifications, Ford Racing painted all the key suspension components, including the damper, spring, and swaybar Ford Racing Blue. A front strut-tower brace adds additional strength to the chassis structure, and P235/55ZR18 high-performance tires maximize the benefits of the chassis upgrades. Under hood, the Ford Racing Power Pack increases the output of the naturally aspirated, three-valve, 4.6-liter V-8 to 325-horsepower, and 330 pound-feet of torque. The Power Pack includes a 90 millimeter cold-air intake and a new performance engine calibration for improved response. The high-flow exhaust system with X-pipe crossover offers better power delivery and a throaty V-8 exhaust note. A shorter rear-axle ratio is installed to capitalize on the Shelby GT coupe’s extra power, especially accelerating off the line. For Shelby GT models equipped with a manual transmission, a Hurst short-throw shifter is installed for more precise shift action. “The Shelby GT is great fun on the track,” continues Shelby. “It’s got the heart and soul of the Mustang GT pumped up with a strong motor, nimble chassis and great sound. It’s one of those rare cars that’s easy to drive really fast.”