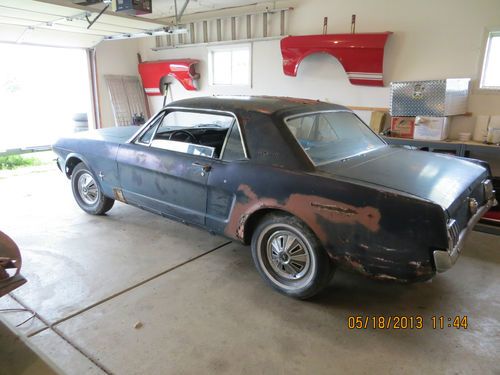 TITLE IS NOT SALVAGE ITS NON EXISTING, I bought this car from someone who didn't have a title. he stated previous owner had lost title. I was going to part it so I wasn't worried about it.I have a 6cyl. shell that I am converting to a V-8 and need a lot of misc. parts that will be expensive to buy bolt by bolt. so was looking for a car to part out. I found this one which would be perfect, but I hate to part it considering the shape. If it sells I will look for another one if it dosent I will part it and sell whats left. Don't get me wrong it will need a total restoration, but its all here, as near as I can tell its all original, and pretty complete. its a 4 lug, 6cyl., sprint edition. the engine will turn by hand, but I haven't tried to go any further with it. Please look at pictures closely, what you see is what you get. any other parts you see on walls or floor are not included. I will try to answer any questions I can. but please be reasonable. Im not going to try to get it running. I will be out of town 5/22-5/25. but will check and answer questions on sat. when I get home. I am setting a reserve because of what its worth to me in parts. So its pretty well set in stone. NO I wont end early, and winner will have to arrange any shipping or pick-up.  would like a deposit of 300.00 with in 48hrs and full payment on pick-up or 7 days, which ever comes first. I can store for a reasonable time, as long as its paid in full.    thank you and good luck bidding