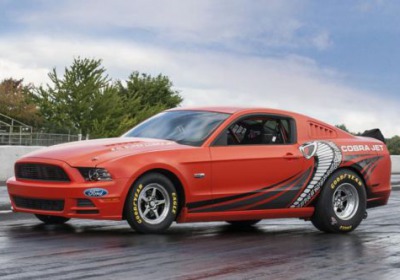 Prototypes developed by major automakers typically remain in said company's custody, but every once in a while, one trickles out into private hands. And that's just what we have here. Ford is donating a one-of-a-kind factory prototype for the 2014 Mustang Cobra Jet that will be auctioned off later this month by Barrett-Jackson in Las Vegas to benefit the National Multiple Sclerosis Society.

To be offered with no reserve on Saturday, September 28, 2013, the Cobra Jet prototype's winning bidder will also receive tutelage at Roy Hill's Drag Racing School in Sophia, NC, along with tours of the Ford Product Development Center, Ford Racing headquarters and Ford Design Studios with Mustang chief engineer Dave Pericak. Scope out the video and details below for what could be the ultimate Mustang experience for a good cause.

LAS VEGAS, September 12, 2013 –Ford Motor Company will join Barrett-Jackson Auction Company among the Las Vegas lights from Sept. 26-28, 2013 to sell the star of the show – a one-of-a-kind prototype of the NHRA competition-ready 2014 Mustang Cobra Jet. The Cobra Jet will be sold at no reserve on Saturday, Sept. 28, with proceeds benefiting the National Multiple Sclerosis Society.

"The money to found Ford Motor Company came from Henry Ford's only race as a driver, so you could say motorsports is in our blood," says Dave Pericak, Mustang chief engineer. "This Cobra Jet is an awesome factory turn-key performer at the drag strip. It's capable of approximately nine-second quarter mile runs as delivered from Ford. And we will include several once-in-a-lifetime experiences to the winning bidder. For example, few get to see the inner workings of the Ford Product Development Center and Ford Racing to learn how to leverage the Cobra Jet's power. This information can then be taken to the track to immediately break into competitive racing."

The winning bidder also will enjoy:
- Training at Roy Hill's Drag Racing School in Sophia, N.C.
- Tour of the Ford Product Development Center and Ford Racing with Mustang Chief Engineer Dave Pericak, including a backstage pass into the Ford Design Studios
- Their experience captured for a future Mustang book and documentary
- Video of the vehicle build, testing and the action from Barrett-Jackson Las Vegas

"We're proud to offer the opportunity for a serious competitor to up their game with this Mustang Cobra Jet," says Steve Ling, North America car marketing manager for Ford. "But, just as important, we're honored the proceeds will support the National Multiple Sclerosis Society's work with those living with this disabling disease of the central nervous system. Through our long-standing relationship with Barrett-Jackson, we continue to support charities through exceptional vehicle sales."

During the auction, Ford will offer the public Ride-and-Drive and hot-laps experiences at the Mandalay Bay Event Center. The Ride-and-Drive will feature Ford's elite stable of vehicles. For power junkies, the Shelby GT500, Boss 302 Mustang, Focus ST, Fiesta ST, and Shelby American-built GT350, GT500 Super Snake and Shelby Focus ST will make a rare appearance at the hot-laps experience.

For auction information, visit the Barrett-Jackson website or Facebook. For news on the Cobra Jet, please visit fordracingparts.com/cobrajet.