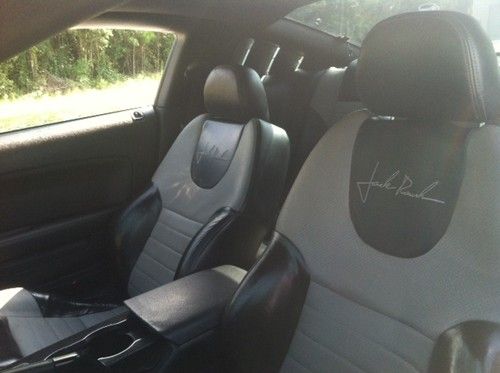 Condition: UsedA vehicle is considered used if it has been registered and issued a title. Used vehicles have had at least one previous owner. The condition of the exterior, interior and engine can vary depending on the vehicle's history. See the seller's listing for full details and description of any imperfections.Seller Notes:"We have up for sale a 2005 Roush stage 1 Mustang . The color is a lime gold and white with black and gray leather interior. The car is in very good condition. It has 20in wheels i don't believe they are Roush but are in great condition. car runs and drives great it is mechanically sound and has been looked over.It has some scratches and dings on the bumpers but nothing that takes away the overall look of the car. interior is in very good condition no rips or fading of the interior.If you have any other questions about the car you can also call Walbridge Auto & Performance LLC we are a local repair and performance Shop. (985) 863-2500.Roush # 05-0851"

The car is for sale locally. we require a $1000 deposit within 12 hours of winning bid.The car will need to be paid for with in 7 days of end of auction. The car can be picked up locally and i will assist in getting it shipped with your shipper. Please don't bid unless you have the funds to purchase the vehicle.If you have a specific questions about the vehicle please feel free to give us a call at 985-863-2500 or my cell is 228-216-3415. We also offer and install any performance parts you would want to add to this vehicle. Thanks for looking and good luck.

Autochek shows on the vehicle report that there is unibody/frame damage. We are a shop and have fully looked over the car and the only damage seen is a bent tow hook that is attached to the frame. There is no frame damage to this vehicle and anyone is welcome to come put this car on our lift and inspect it for yourself. The car has never been in a serious accident that has altered the vehicle in the way that it shouldn't perform as it came from the manufacturer. Any questions please feel free to give us a shout. The car is listed locally and is a very nice example of a Roush Mustang. Thanks again.
Reserve is set low for quick sale don't let this deal pass you by.
LOW LOW LOW reserve.