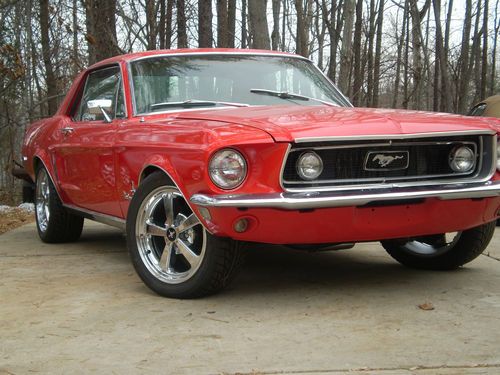 For sale is my 68 Mustang that I got December 24th 1992 prior to my entrance into the United States Marine Corps. I named her Natasha. When I got her she had a 302 w/289 heads Factory air conditioning, PS, and manual brakes. She was Cherry red with maroon interior. So I drove her for a few years like that. Natasha has been one of the Loves of my Life.

So about 5 years ago I decided to start a full restoration. Since Natasha was starting to show her age. I pulled her into the Garage and proceeded to pull every her down too the bare shell. I took her to a Classic Paint and Body shop in Charlotte NC. They worked her over and sprayed her in Bright Inferno Red. Now keep in mind I wanted to Hot Rod her up, add some Flare, but I also wanted to preserve her original appeal. I did not want her to be a beast. I looked at a lot of things other guys had done.

Drivetrain. I decided that the 93 Cobra Power Plant was the ticket.  So I bought a 302 Crate Roller Engine for a 1993 Cobra with the GT40 Cobra Intake which has been Extreme Honed. This is an original 93 Cobra intake. These are very rare and highly sought after. This Mustang has a Custom built set of Long Tube Headers that actually fit the car without scraping everything you cross over, unlike the TriY's. They fit around the C4 Bell house like a glove. The transmission is a fully rebuilt C4 automatic with a brand new 2500 Stall. Trans shifts smoothly and not rough at all. I did have a shift kit installed. The exhaust runs straight back to a set of Flowmasters for that nice Growl. I decided on the electronics to go with the more tunable version, so I used the A9P. The rear gears are Factory 273's She does such a fine job cruising I figured why Fix what's not broken. Wheels I wanted to give Her an updated looking set of wheels so I bought a set of Chrome 17x8 OEM Ford Mach 1 wheels for her. Keeps her looking Classic, but puts a great spin on her looks. I just added Brand new KYB Shocks.

Interior. I did not want a solid color and I did not care for the OEM red's of the day. I looked at different colors and cars and decided to use TMI's 1966 Mustang Red with 1968 Black on the seats. I used 1968 Black Door panels. Red Head Liner. Black Dash with Red Paint. I also used Dyno mat in the entire interior space, which really knocked out the noise. For the Stereo system. I used a Kenwood KDC-MP238. It has Blu Tooth, and the AUX input to run your Pandora or Ipod. I used the Q-Forms kick panels for some added sound in the cabin. She has Kenwood 6 1/2's in front and 5x8's in the rear. Great sound . She is wired up to have an amp in the back if you wanted to add a subwoofer. I added Lokar Pedals. The brake pedal is not pictured, but I have it new in the wrapper. I also used New Black Carpet.

I also Powder coated all the door hinges, trunk hinges, hood hinges in Black. I wanted to avoid that trashy look and keep it looking good for years which it will.