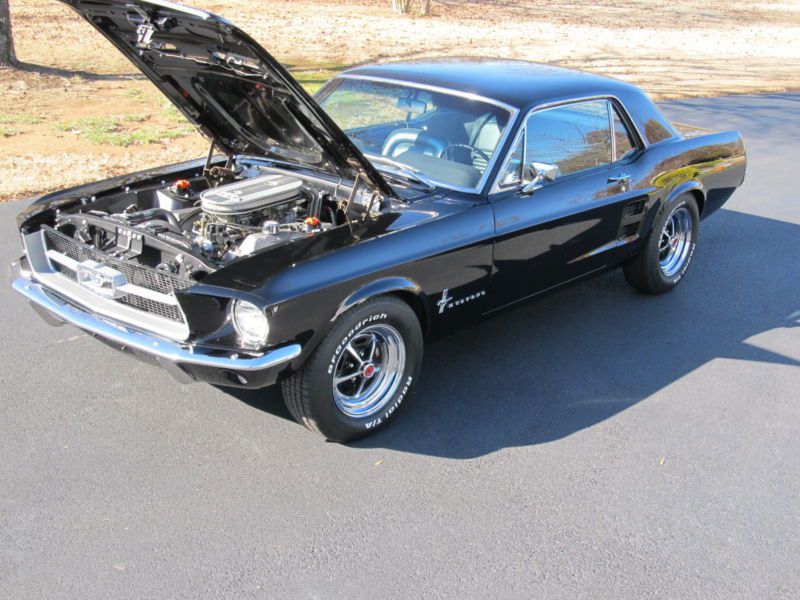 If you have any questions feel free to email me at: kandiskccuebas@thefamilyhome.net .

1967 Mustang S code 390 4 speed Black//Black coupe Fresh Restoration
Vin 7F01S169668
NOT FOR THE FAINT OF HEART
1967 Mustang S code 390 4 speed Black on Black Coupe
2 - vintage style matching BJ-BK 4 barrel Holley 600 CFM, Blue Thunder intake
Cobra LeMans Valve Covers and Cobra air cleaner
Engine is very nicely detailed. Detailed as copy of the Shelby GT 500
Engine has about 300 break-in miles, Runs really strong.
9" rear 3.25 locking differential, Power Steering, Power Brakes Kelsey Hays
front Disc rear drums
Original motor was gone when I purchased, Block I believe came from a 67 S code
Fairlane. Engine built by a prominent race motor builder, bored .060 over, crank ground 020,
Comp cam #33-2384, I have the cam card if you want more specs.
Pistons Federal Mogul H304P60
Rotating assembly balance, Flywheel ground and balanced
Top Loader Rebuilt and new Hurst comp linkage and shiftier
2-1/2" exhaust with H pipe
Body taken apart and striped to bare metal, top to bottom in and out no panels replaced or patched.
Car spent most of it's life in California.
Original Data plate and both fenders have original factory stamping. The drivers side is visible, passengers side
is covered by fender.
Body is arrow straight The original stainless and aluminum trim was professionally restored.
correct 67 mustang 390 power steering installed.
This car comes with a Marti report showing all the orig specs and options that came on car, showing it's 1 of 3 as
it left the factory
5 Specialty Wheel Magnum 500 15 x 7 wheels with B F Goodrich P215 70 15.
Tires have about 300 miles on them and the trunk tire is brand new.
New Windshield, balance of glass is orig car-lite