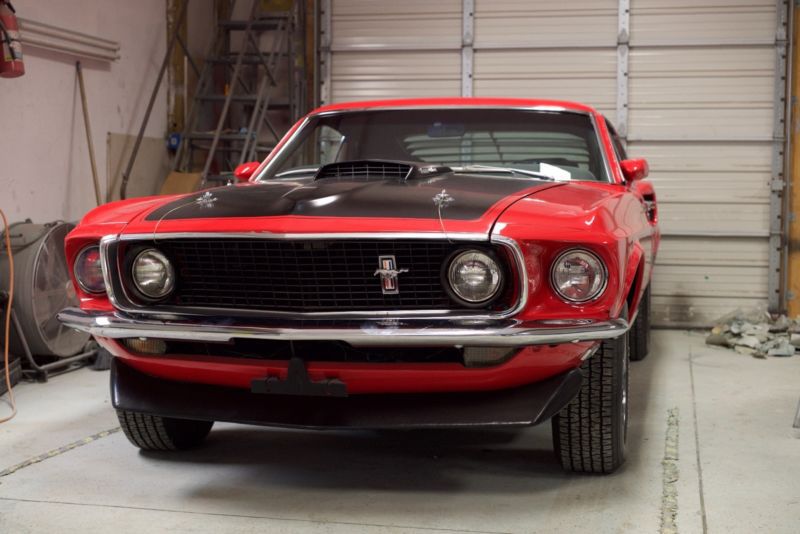 Feel free to ask me any questions about the car : dirk.schuck@clovermail.net .

We are selling our 1969 Mustang Mach 1. This is an original 4 speed with the numbers matching 428 Cobra Jet, as it
carries the Q engine code. This is an absolutely beautiful example of a rotisserie restoration. Every nut and bolt
was taken off when this holy grail of a mustang was restored.
The Interior is all brand new, and has the rear sport deck seat, allowing it to fold down, an option original to
the car from the factory. The car has the orginial factory tilt away steering column, along with a functioning
factory tach. Headliner is flawless.
The Engine and the trans were both completely rebuilt, and the car runs and drives flawlessly. The engine is the
numbers matching original block that the car came with from the factory. The clutch is also brand new, with no more
than 300 miles on it. The Engine has Edelbrock Aluminum heads and an Aluminum intake. The car also has power disc
brakes and power steering, both original options from the factory. Being completely rebuilt, the four speed trans
shifts like butter, and also has a complete Hurst shifting assembly. The original shift knob and complete original
linkage is also included with the car. The rear end is a ford 9 inch and is a 3.50 Traction-Lok rear, exactly what
it came with from the factory.
The body on this mach 1 is laser straight, and the red paint job is absolutely beautiful. The Decals and striping
are perfect. The Matte black on the hood, spoiler, and louvers is beautifully done. All of the body panel gaps are
very well executed. Doors shut great. All of the door jams look as good as the body. Trunk is very clean. The under
body is painted the original red oxide, and carries all of the factory markings that this particular car came with.
This car is priced to sell. I can have a video walk around of the entire car made for serious buyers. Digital copy
of Deluxe Marti Report is included.