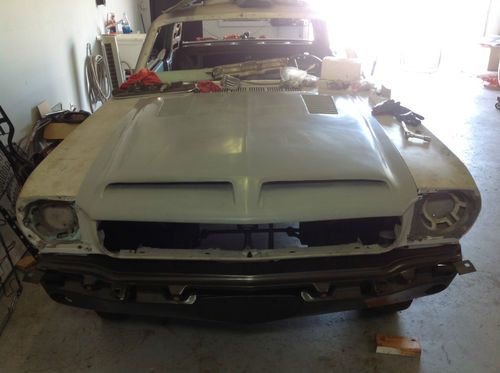 Well folks let me begin by saying that it was always a dream of mine to restore a 60's Ford Mustang. I began to piece together my plan at the begining of the year when I found this original California 1966 Mustang in Pennsylvania. Unfortunately my family comes first and an unforeseen medical emergency puts my plans on hold for now. I am listing this coupe for sale and prepared to take a loss to sell it fast!!! Car had been stripped of its original 289 engine and 3 speed manual transmission but the body is in excellent condition.           NO RUST ANYWHERE!!!! The engine bay, interior floors and under carriage have already been re-sprayed. This is a great project to finish, just pick your engine, interior color and exterior paint. I have already done the following since April 2013:

I also have all the original trim, seat frames (re-welded & painted), dash parts, wiring harness, windows, glass and additional parts ready to go with the car. I was setting up this car to be automatic so I also have a C4 automatic transmission ($400) from another 66 Mustang that will go with the sale.

Email me with questions and concerns or for additional pictures. Good luck!

Buyer responsible for pick up but buyer will assist with reputible transport company contact used in the past.

Car is also listed for sale locally so I reserve the right to pull the car from auction at any time.