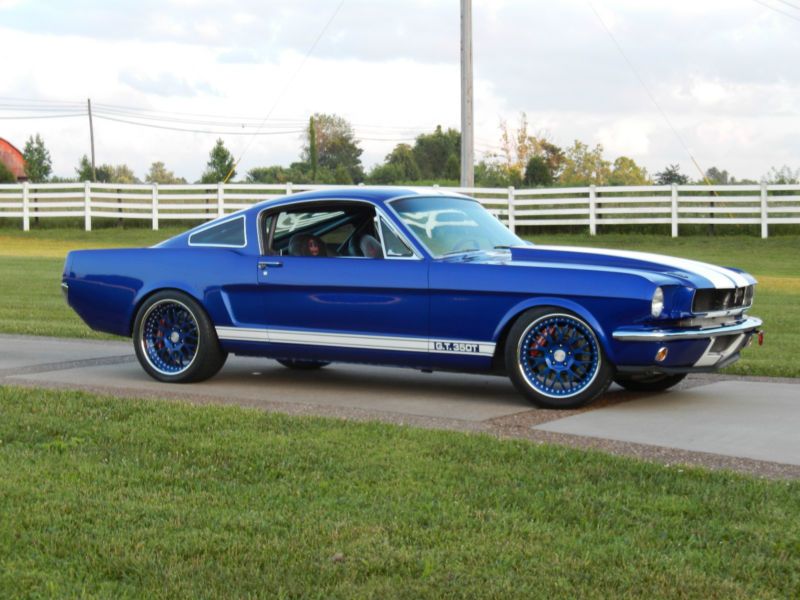 1965 Mustang 2+2 fastback
360ci Twin Turbo Engine
6- Speed Trans
AND YES IT IS FAST (LIKE NEW)
UP FOR SALE IS A 1965 Mustang fastback.
Details
VIN 5R09A224423
Exterior Color BLUE/WHITE
Interior Color BLACK
Cylinders 8
Engine Size 302
Transmission 6-SPEED MANUAL
Description
The fuel injected
360ci stroker motor was built to hold over 900hp. Its intricate hand made twin turbo system. Please take a close
look at this engine compartment pictures and to acknowledge the amount of work, labor and fabrication that has gone
into to this open check book build. The tubing and piping was handmade around the twin Garrett T04B ball bearing
turbos.
Every line throughout the car is steel braded and V clamped. Custom fabricated twin intercoolers and air intake
system along with a sheetmetal intake. The engine is more than capable of 850-900hp but is at conservative at 600hp
for street use. Engine and transmission oil-coolers mounted in the inner fender well with auxiliary fans.
Aluminum radiator with twin auxiliary fans. Full mandrel bent exhaust out the back with an electric cut out
conjoined by an x-pipe. The 6-speed tremec transmission shifts flawlessly and is mated to be stage 3 clutch with a
lightweight flywheel. Custom fabricated 9" 31 spline rear axle with Auburn Pro posi-traction and chromoly axle
tubes.
AM/FM radio
2 speed wipers
Fold-down rear seat
CUSTOM wheels
dual exhaust
NEW blue PAINT
NEW CUSTOM LEATHER INTERIOR
NEW ONE OFF CUSTOM WHEELS
POWER STEERING
POWER BRAKES
CUSTOM GRIP WHEEL
CUSTOM TACT & GAUGES
AM/FM RADIO
ORGINIAL FLOOR AND TRUNK PANS
ALL OTHER SUSPENSION IS CUSTOM
ALL CHROME AND STAINLESS LIKE NEW
ELECT-WIPERS
TOO MUCH TO LIST (MUST SEE)
LOOK UNDER THIS 1965 FASTBACK CUSTOM IT IS NICE.
THIS 1965 fastback Mustang LOOKS AS GOOD AS THE DAY IT WAS MADE . THE PAINT IS SLICK AS GLASS AND THE BODY IS
LASER STRIGHT ALL THE BODY PANELS LINE UP AS THEY SHOULD.
THIS 1965 Fastback Mustang RUNS AND DRIVES LIKE A DREAM. NOTHING WAS OVER LOOKED THIS 1965 fastback Mustang IS
READY FOR ANY SHOW.