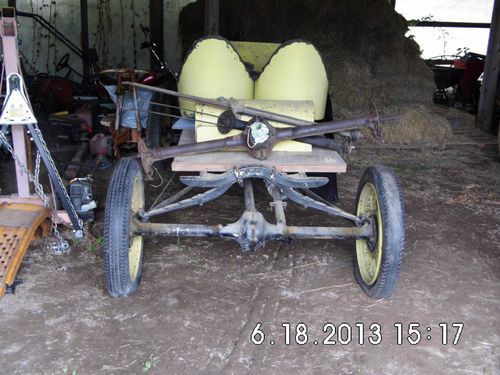 Condition: UsedA vehicle is considered used if it has been registered and issued a title. Used vehicles have had at least one previous owner. The condition of the exterior, interior and engine can vary depending on the vehicle's history. See the seller's listing for full details and description of any imperfections.Seller Notes:"Very straight, rust free"

All original, complete rolling chassis that was drive-able when parked in a dry barn. The seats, floorboard, firewall, gas tank, steering column, headlights and radiator were taken off for a restoration. It has 21" Model A wire wheels. The engine turns freely, is missing the coils and magneto cover. Radiator was stolen. Comes with spare rear end, and 2 steering columns. The headlights have the acetylene burners in them, but no reflectors or lenses. The carburetor is now a downdraft with "Ford" in raised letters. Header has an removable plug for running open header. The seats and engine cover are made from heavy galvanized steel. Seats are upholstered.There are 4 fenders, all straight and in great shape. Car is still stored in a dry hay barn, and has no rust. Comes with bill of sale only. Not sure of the year. Would make a cool rat rod, or you could put a regular body on it. With an s 10 rear end and a dropped front axle, it would make a neat rat rod. You could even add a v6 or v8.

Shipping...I will help your shipper load the car.
Payment...Pay Pal..Deposit of US $500.00 within 24 hours of auction close. Full payment required within 3 days of auction close. I reserve the right to end auction, as I am advertising it locally as well.