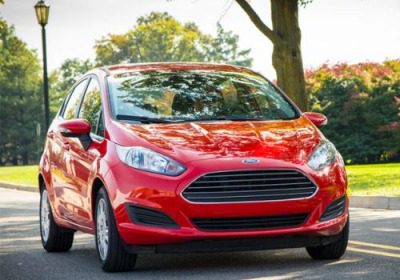 Ford is following up on a report we posted a few weeks back that the Blue Oval would be adding stop-start technology to its entire model range. Now, the Dearborn-based automaker has announced that the fuel-saving feature would be available on 70 percent of the company's range by 2017.

Ford claims the technology will improve fuel economy by around 3.5 percent, although its actual effect will vary based on how the owner drives – apparently up to a 10-percent improvement is possible for those who sit in heavy traffic (Los Angelenos, this means you). The latest recipient of the technology is the updated 2014 Ford Fiesta with the company's three-cylinder EcoBoost powerplant.

Part of the reasoning for the new addition has to do with cost. Ford claims the tech is affordable and easy to implement. "Simply put, Auto Start-Stop helps customers use less fuel, which is an important component of Ford's Blueprint for Sustainability," Ford's global powertrain vice president, Bob Fascetti, said.

There's no timeline of when start-stop will arrive in certain models, although we'd expect as refreshes come due for a number of models in the next few years (Fusion, Focus, Explorer and Escape to name a few), start-stop will be a common addition. Scroll down for a press release from Ford.

70 PERCENT OF FORD LINEUP TO HAVE AUTO START-STOP BY 2017; FUEL ECONOMY PLANS ACCELERATE

Auto Start-Stop technology to be available on 70 percent of Ford's North American vehicle lineup by 2017, reflecting progress toward the company's plan for increasing fuel efficiency across its lineup
Ford Auto Start-Stop is an affordable technology that provides a seamless way to increase fuel efficiency as much as 10 percent in city driving
Ford fuel economy plans accelerating with rollout of 45-mpg 1.0-liter EcoBoost® Fiesta in 2014, and research into new dynamic cruise control

Ford announced today that Auto Start-Stop will be available on 70 percent of its North American vehicle lineup by 2017.

A major part of the company's Blueprint for Sustainability, the expansion of Auto Start-Stop comes as the award-winning 1.0-liter EcoBoost® engine is set to go on sale in the 2014 Ford Fiesta. Rated at 45 mpg EPA highway, the new Fiesta is the most fuel-efficient non-hybrid or diesel on the market. Ford is also researching dynamic cruise control, a breakthrough technology that predicts road conditions to optimize fuel economy.

"Simply put, Auto Start-Stop helps customers use less fuel, which is an important component of Ford's Blueprint for Sustainability," said Bob Fascetti, vice president, Ford global powertrain. "By making Auto Start-Stop available on more vehicles, we are working to be part of the solution to environmental sustainability with effective, fuel-saving technologies."

Auto Start-Stop seamlessly turns off the engine when a vehicle stops, while an advanced battery powers vehicle accessories and systems in place of the engine – saving fuel. The engine restarts instantly when the driver begins to release the brake pedal.

Actual fuel savings vary and depend on driving patterns. While average improvement in fuel efficiency equals roughly 3.5 percent, those who drive in heavy traffic – such as congested urban environments – could see fuel efficiency increase by as much as 10 percent. It also provides a meaningful reduction to CO2 emissions that are avoided during long idle times.

Ford has years of experience with Auto Start-Stop via its electrified powertrain hybrid and plug-in hybrid offerings, and the feature is popular on a host of Ford models in Europe. By year-end, Ford expects to sell more than 500,000 vehicles equipped with Auto Start-Stop globally. In the United States, Auto Start-Stop is available on the 2014 Ford Fusion with 1.5-liter EcoBoost.

Another milestone is the award-winning 1.0-liter EcoBoost engine that goes on sale in the 2014 Fiesta. Its 45-mpg highway rating is the highest of any non-hybrid, gasoline-powered car in America. The 1.0-liter EcoBoost Fiesta outperforms some competitor diesel and hybrid offerings, while providing the most powerful entry in the subcompact class with an SAE-certified 123 horsepower and 125 lb.-ft. of torque.

Dynamic cruise control modifies the driver-selected set speed in response to not only current road conditions, but also to predicted road conditions – all onboard and in real time, with no Internet connection or stored databases. Ford research shows this feature could improve fuel efficiency up to 10 percent, depending on route.

"Think of this as cruise control technology that thinks," said Dimitar Filev, senior technical leader, Ford research and development. "While this is a research-based technology now, its objective is to think fuel economy first."

Other fuel-saving technologies developed under the plan available on Ford vehicles today include:

See also: Ford to add 5,000 US jobs plus 3 plants and 23 vehicles globally, Mustang pinball game will feature art by Ford GT designer, Ford board pushing Mulally for decision amidst fears story is drowning out other news.