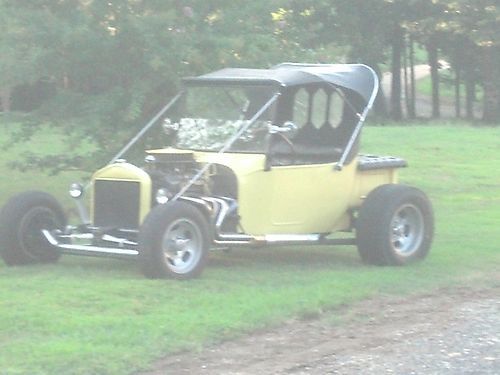 Condition: UsedA vehicle is considered used if it has been registered and issued a title. Used vehicles have had at least one previous owner. The condition of the exterior, interior and engine can vary depending on the vehicle's history. See the seller's listing for full details and description of any imperfections.Seller Notes:"Up for auction is a 1923 T bucket roadster. This is a replica car that was made from a 1956 buick car. The engine is a 307 chevy w/ turbo 350 automatic transmission. This car is a blast to drive. This is not a new vehicle but it does not smoke and runs out fine. Some of the snaps on the top need replacing. I have a clear Arkansas title for a 1954 buick from which it originated."

This is a used vehicle and seems to be mechanically sound. The motor is a 307 chevy small block with an Eldobrock carb. The engine does not smoke and runs strong. The Transmission is a turbo 350 which shifts as it should. The oil pan gasket and transmision pan gasket do drop a few drops of oil but the mains and transmission seals don't leak. The brakes are drum style and work well. The suspension is a single buggy spring design in front and rear.