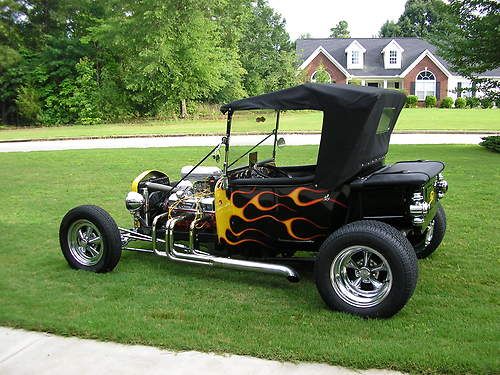 Condition: UsedA vehicle is considered used if it has been registered and issued a title. Used vehicles have had at least one previous owner. The condition of the exterior, interior and engine can vary depending on the vehicle's history. See the seller's listing for full details and description of any imperfections.Seller Notes:"Up for Auction is My 1923 T Many trophies & awards from 2005 to 2013 including latest 2013 Best of Class Trophy & 2013 Summit Cool Cruiser Award.350 4 bolt main ,Chevy V8/POWER , 350 auto trans , Chevy rear.New Fuel Cell,tires all around, New interior,and carpet.Top 3 years old , still like new as paint and chrome. Will run down the Highway smooth and strait , tracks very well . Dont overheat,nice driving to Shows or trips.Allways in Show condition . Only has about one thousand miles since restoration , 8 yrs ago.Constantly adding new stuff and inprovements. Selling as I am getting to old to enjoy it. And plan to replace it with a new truck. No turn sinals although Front lites are in place . Wheels show slight pitting. Registered in Ga. as Antique 23T , Dont need turn sinals.Always lots of fun and lots of praise , Always dependable."