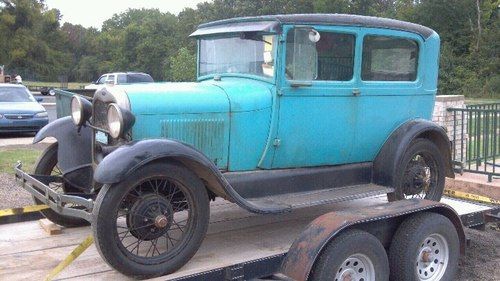 Condition: UsedA vehicle is considered used if it has been registered and issued a title. Used vehicles have had at least one previous owner. The condition of the exterior, interior and engine can vary depending on the vehicle's history. See the seller's listing for full details and description of any imperfections.Seller Notes:"The car does both run and drive, but stalls due to junk from the fuel tank clogging the carburetor's intake. The seats and wood are in good condition. The headliner is sagging in the rear and the fabric on the top will need to be replaced. The car has never had rodent damage and comes as you see it. Included will be numerous new/used parts as well as a full set of 4 extra tires and wheels."

The original owner of this car lived in California...where it spent the first half of its life. After WW II, it was purchased and restored by the nephew of the original owner. Eventually he brought the car to Arkansas where it was a daily driver.

Last fall, I purchased the car from the 2nd owner's widow. It had been parked in storage some 8-10 years following his death. The car is currently titled and tagged in OK.

After bringing the car home, I replaced the battery, belts, hoses, and timing gear. The car does both run and drive, but stalls due to junk from the fuel tank clogging the carburetor's intake.

The seats and wood are in good condition. The headliner is saggin in the rear and the fabric on the top will need to be replaced.

The car has never had rodent damage and comes as you see it. Included will be numerous new/used parts as well as a full set of 4 extra tires and wheels.

Asking price is $12,000. Reasonable offers will be considered, but don't bother making an offer if you're going to low ball me.