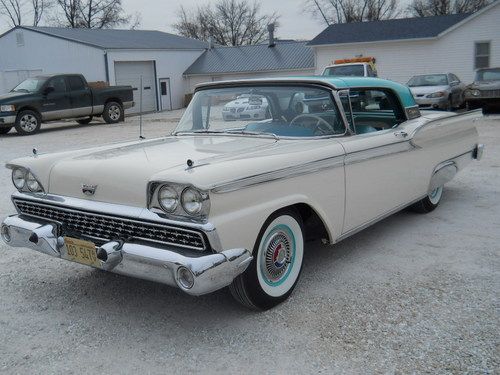 1959 Ford Galaxie 500 Skyliner Retractable top .This car has been gone through from top to bottom. I will tell you as much as I can Please feel free though to call or e-mail me with Any questions you may have. Motor and transmission both have been professionly rebuilt and have less than 60 miles on them.Body was completely disassembled stripped  to bare metal nearly rust free replaced bottom  6'" of rh quarter to repair rust. 98% of all SS and chrome has been repolished or replaced. Has PPG basecoat/clearcoat paint. Has completely new ABC brand  interior including seat covers carpets sunvisors and trunk interior.New tires all around with new Sunburst wheel covers. Has new  Bumper guards and exhaust deflectors  Also has new Stainless exhaust. .Have  pictures of total restoration  from start to finish if you need to see them. Feel free to call me anytime with ANY questions. 217-248-5235  Jack