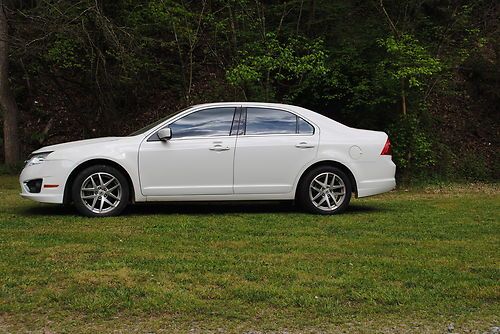 i bought this car from a friend who had bought it for his daughter and she had gotten into trouble and he sold it to me its a 2011 ford fusion sel. its very clean and been well taken care of.its clean inside and out. its got a door ding in the drivers side rear door about the size of a dime,other than that it has normal wear and tear,no  scratches or anything.. it will need a set of tires pretty soon,about 30 percent left. also i had the front bumper cover replaced as she had hit something in the front and damaged it, other than that the pictures should tell the story. this is a nice car,and runs great with no issues,everything works as it should. the spare has never been used,owners manual is in glovebox. ill start the bidding out at 9900.00 dollars which is 6 or 7 thousand under it value,as i bought it at a good price ,dont be scared asto the low opening bid as there is nothing wrong wi th this car,im just ready to sell it,and hope it gets plenty of bids. i have clean clear title in hand,please dont bid if you cant buy it or need financing,as it justs  wastes everyones time. i require a 500.00 dollar depoist at end of auction and full payment in 7 days.if you cant meet these requirements please dont bid