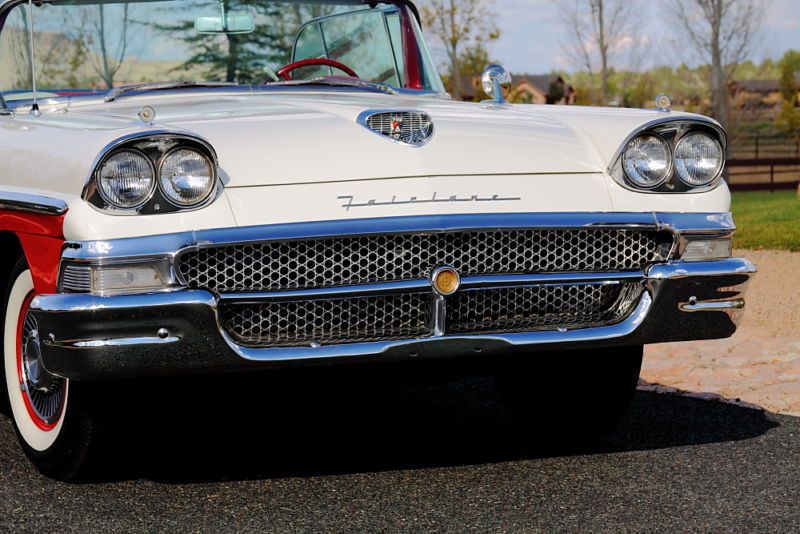 My extremely rare 1958 Ford Fairlane. I collect rare vehicles from around
the world and must say this one is one of my favorites. It is in near perfect condition. It comes with the
Continental Package, All Owners Manuals, Has Cold AC, Original Wheels, The Skyline is a pleasure to drive.
Extremely comfortable!! 1958 had fashionable quad headlights, a grille that matched the 1958 Thunderbird,
Performance seekers were excited about the new engine advances that included the new "big block" 332/352 V8s, which
replaced the old 292 and 312 V8s, and a more sophisticated three-speed Cruise-O-Matic self-shift transmission. This
retractable hardtop Skyliner was again offered for the second year. 1958 FORD FAIRLANE SKYLINER INTERCEPTOR 332
SPECIAL V-8. THE CONTINENTAL KIT IS THE ORIGINAL DEALER INSTALLED MODEL. ARGUABLY ONE OF FORDS MOST BEAUTIFUL AND
ENDURING CLASSIC DESIGNS. Finished in period correct Torch Red (originally code E- Colonial White) and Red Roof,
with two-tone Red and White interior, this exceptional and very rare Ford Fairlane Skyliner with retractable
hard-top is as nice as it gets.