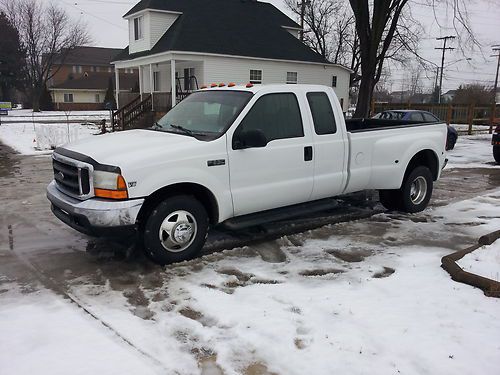 1999 F 350 DUALLY DIESEL 7.3 DUALLY 2 WHEEL DRIVE 226K MILES  AUTOMATIC WITH OVERDRIVE, SELLING FOR A FRIEND NEW GLOW PLUGS AND RELAY TRUCK IS RUST FREE,   VERY SHARP TRUCK NEEDS A NEW WIPER MOTOR RELAYS DONT WORK, INTERIOR IN GOOD SHAPE FOR YEAR NEW BALL JOINTS ON RT SIDE, NEW BATTERYS, I DROVE TRUCK RUNS GOOD DOWN THE ROAD, LOTS OF POWER, THERE IS CRACK IN WINDSHEILD REESE HITCH, BALL IN BED ANY QUESTIONS CALL 734-320-1419 WILL ANSWER IF I CAN BUDDY BOUGHT FOR HIS WIFE TO PULL HER HORSE TRAILER AND SHE SAYS ITS TO BIG  SO HE DOWN SIZED