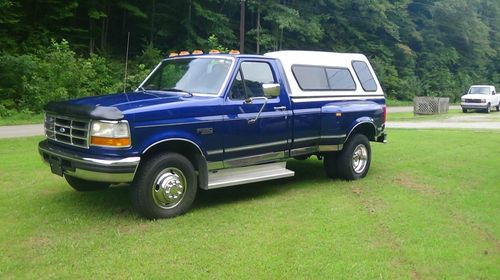 Condition: UsedA vehicle is considered used if it has been registered and issued a title. Used vehicles have had at least one previous owner. The condition of the exterior, interior and engine can vary depending on the vehicle's history. See the seller's listing for full details and description of any imperfections.Seller Notes:"Minor paint chips, Minor Paint fading on rear fenders, overall nice shape. Slight rust only on extreme lower section of tailgate."

Up for auction is a nice 1997 Ford F350 XLT Dually Regular Cab Pickup.  I have decided to part with my trusty Ford.  It is an excellent truck to use for work or play.  I used it to tow a race car trailer.  Recent Maintenance has included new tires, along with new rear brakes and all of the related hardware.  The truck has a 351 Windsor engine that runs excellent and burns absolutely NO oil.  The oil has been changed every 3,000 miles and there are not any knocks or rattles in this engine.  The transmission is an automatic and works exactly as it should.  No Problems whatsoever.  The rear end has 4.10 gears from the factory and is excellent condition as well.  It also has ice cold air conditioning, working cruise control, CD Player, and a trailer brake controller.  All of the lights work, as do the power windows and door locks.  I've used this truck to tow my 24 foot enclosed car hauler up to 1,000 mile round trips and have never had any problems at all.  The interior is in excellent condition as is the body.  The ONLY rust on this truck is in the extreme lower portion of the tailgate.  The rest of the truck is as solid as a new one.  I believe that paint is all original and still have a very good shine to it.  Only the tops of the rear fenders have some paint fading.  The truck does have some minor paint chips, but for a 1997 model it is not bad at all.  I really like this truck but I have only put 8,000 miles on it in the last five years.  It is time for it to go and free up a little space in my drive way.

Feel free to ask any questions that you may have about this truck.  I can telly you it is ready to drive anywhere including cross-country.
Payments that I accept is: US Money Orders, Certified Check, and Cash in person.  Full payment must be received by 7 days of auction end.  Truck must be picked up  within 30 days.  Buyer is responsible for all shipping or pick up.
This truck is for sale locally and I reserve the right to end auction early should it sell locally.