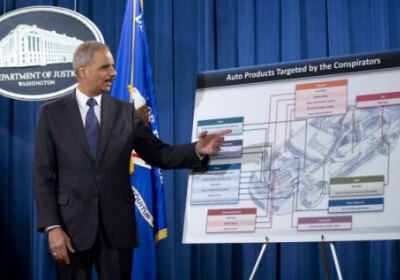 Nine Japanese suppliers have pleaded guilty in US court over charges of price fixing in the automotive parts industry, resulting in the Department of Justice doling out a total of $740 million of fines, according to a report from Bloomberg. The scandal, which has resulted in General Motors, Ford, Toyota and Chrysler spending up to $5 billion on inflated parts and driving up prices on 25 million vehicles has sent the DoJ hustling into investigations. "The conduct this investigation uncovered involved more than a dozen separate conspiracies aimed at the U.S. economy," Attorney General Eric Holder (pictured above) said during yesterday's press conference.

As the investigation stands, the DoJ has issued $1.6 billion in fines against 20 companies and 21 individual executives, with 17 of the execs headed to prison. Deputy Assistant Attorney General Scott Hammond said, "The breadth of the conspiracies brought to light today are as egregious as they are pervasive. They involve more than a dozen separate conspiracies operating independently but all sharing in common that they targeted US automotive manufacturers."