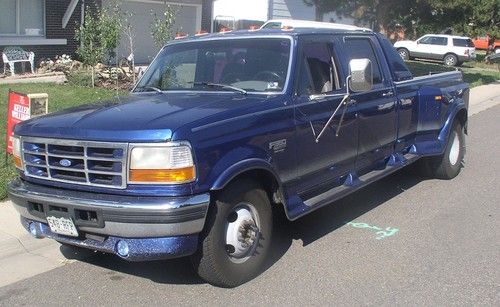 Condition: UsedA vehicle is considered used if it has been registered and issued a title. Used vehicles have had at least one previous owner. The condition of the exterior, interior and engine can vary depending on the vehicle's history. See the seller's listing for full details and description of any imperfections.Seller Notes:"Needs new windshield. Interior seating shows heavy wear. Basic cosmetics worn such as paint fading away, most noticeably on the roof. Punctured bed on drivers side. Rubber trim around bed shrinking and most likely is brittle."

I have here a 1997 F-350 Crew Cab Dually Powerstroke. It is the Mark 3 series with all power accessories, including a new factory TV w/video cassette tape player, and it still works.This has a 7.3 liter diesel engine with turbo. It has an E40D automatic transmission and not quite 184000 miles on it. It was built with the tow package which consists of a flip up ball for goose neck trailers, factory rails for a fifth wheel hitch as well as a 10,000 lbs rated bumper for pull behinds.Truck was recently serviced with tie rod ends and rear axle seals. A picture shows the factory sticker which indicates that the factory tires are 215-85-16, however, all crew cab models with the "Tow package" are sold with 235-85-16 tires that are rated for towing most anything.  These tires have excellent tread, but, are dry cracked from not much use these past ten years.  The only other issue with this truck is that the cruise control stopped working on my last trip to Texas. Front leather seats needs to be covered or redone to original and the windshield needs to be replaced. Kelly Blue Book values this truck at $8750. My reserve is less than then that.