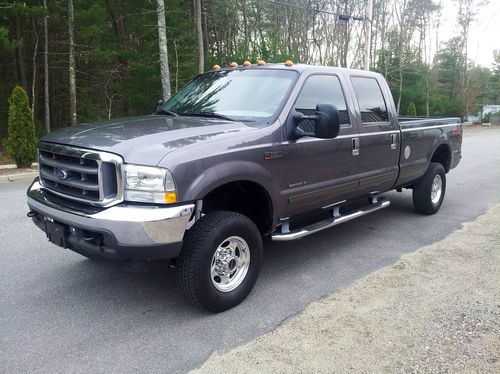 Here she is boys.  For Sale is my 2003 Ford F-350 Crew Cab Lariat 8' Bed with only 63,000 original miles.  This is a ONE Owner Truck with a clean Carfax history report.  This truck is fully loaded with Leather Heated Seats, Rear Parking Sensors, Rear Sliding Window, Plus All the Regular Goodies.  This truck has a  2" Add-A-Leaf Front Leveling Kit, with 2 Rancho Stabilizers, and RS 5000 Rancho Shocks.  This truck, Runs, Drives, Stops, and Shifts as it should.  This is a very nice truck.  The frame is solid, there is no rot under the doors or really anywhere that I can see for that matter.

Recent improvements are as listed:

This Truck is in exceptional condition for the year.  There are a few very very minor dings and chips around the truck, the rear bumper has a little ding on the bottom right, the front bumper lower right valance has a some scratches in it.  As far as the interior is concerned the driver's seat has a few small rips in it and has some paint spots on it.  Also, the sunglass holder above has a chip in it.  Please do not be concerned because all things I am listing are really very minor.  That's all I can really pick on about it.  Please ask for photos of anything you would like to see!