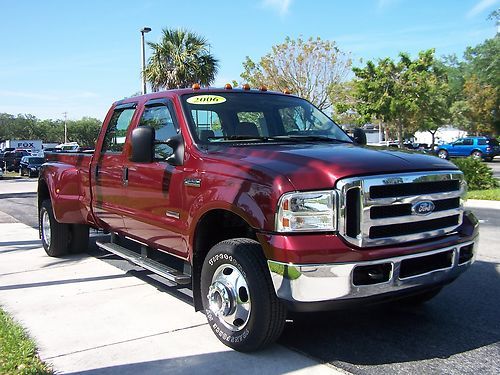 BEAUTIFUL 2006 FORD F-350 DUALLY 4X4 IN BURGUNDY WITH TAN CLOTH INTERIOR. THIS TRUCK IS AN XLT TRIM LEVEL WITH THE 6.0 V8 TURBO DIESEL ENGINE, AND IT ONLY HAS 113,469 MILES ON IT. THIS TRUCK IS SPOTLESS INSIDE AND OUT AND IS A ONE OWNER VEHICLE WITH A PERFECT CAR FAX REPORT. EVERYTHING WORKS PERFECT ON THIS TRUCK AND THERE ARE NO LEAKS AND NO RUST ANYWHERE. IT COMES WITH THE 5TH WHEEL HITCH AND IT HAS THE FOLLOWING OPTIONS: POWER WINDOWS AND DOORS, SPRAY IN BEDLINER, REVERSE SENSORS, TOW PACKAGE, CD PLAYER, AND MUCH MORE.

EXTERIOR: THE BURGUNDY METALLIC PAINT IS IN EXCELLENT CONDITION. THERE ARE NO DENTS OR RUST AYWHERE ON THIS TRUCK. THERE ARE SOME VERY LIGHT CHRATCHES THAT ARE TOO LIGHT TO SHOW UP IN THE PICTURES.

INTERIOR: THE TAN CLOTH INTERIOR IN IS EXCELLENT CONDITION- THERE ARE NO RIPS, TEARS OR STAINS ON ANY OF THE SETAS. THE PREVIOUS OWNERS WERE NOT SMOKERS AND DIDN'T HAVE PETS IN THE CAR WITH THEM. THERE ARE NO FUNNY SMELLS AND THE HEADLINER AND CARPETS ARE ALSO IN EXCELLENT CONDITION. THERE IS NO SAGGING WITH THE HEADLINER AND THE CARPETS DO NOT HAVE ANY TEARS OR STAINS.

WHEELS AND TIRES: THE POLISHED ALLUMINUM WHEELS ARE IN EXCELLENT CONDITION. THE FRONT TIRES ARE ABOUT 80% AND THE 4 BACK TIRES ARE LOW- THEY WILL NEED TO BE REPLACED SOON.

MECHANICS: WE ARE A FORD FRANCHISE DELAERSHIP AND OUR DEISEL MECHANICS HAVE INSPECTED THIS VEHICLE. THE HAVE GIVEN IT A CLEAN BILL OF HEALTH AND IT NEEDS NOTHING EXCEPT FOR A NEW OWNER. THE ENGINE IS STRONG AND THE TRANSMISSION SHIFTS SMOOTH. ALL OF THE POWER EQUIPTMENT WORKS PERFECT AND THE AIR IS ICE COLD.

IF YOU HAVE ANY QUESTIONS PLEASE CALL:

THANKS FOR LOOKING AT OUR TRUCK