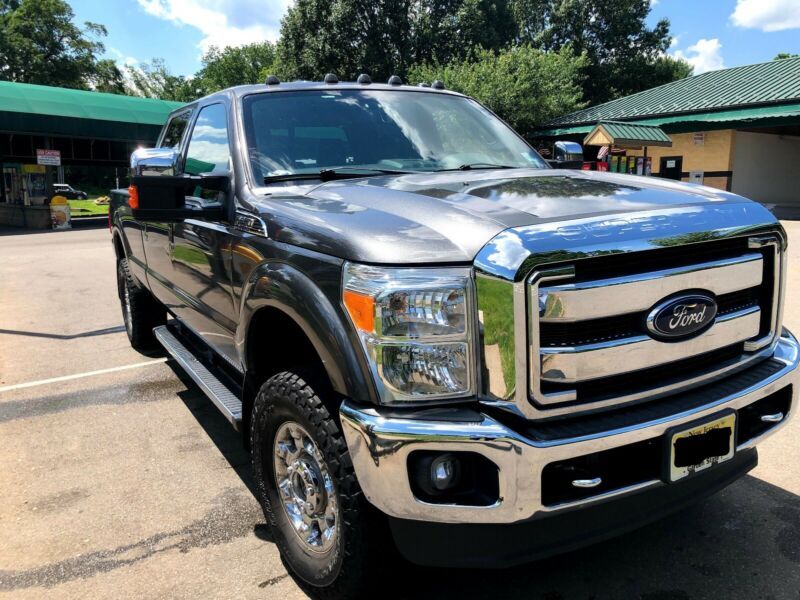 Luxurious Beast. This Super Duty 4x4 Lariat is the largest, most capable F-250 Ford produces. The Super Duty Lariat
features FULL size rear seats, with deep storage under both seats. Front Seats have 8 way w/ Lumbar. Massive,
customizable center console. 6 customizable cup holders. Programmable KeyLess door entry. Longest Pick Up Truck Bed
offered by Ford. With custom LED Bully Step up bar, and retractable folding ladder for tailgating for the kids, or
if carrying a cooler up it. Equipped with 4 x 4 Package chrome running boards. Power Rear view mirrors. Tilt, and
extend, and full folding for tighter spaces. You can set all of these options to simply do what you program them to
do when you start, or stop the car.

Truck factory lifted for 4X4 package. With running boards, giving it great ground clearance without looking silly.
Tires are all terrain premium oversize tires. Able to navigate ANY weather conditions you can send its way. Can tow
a boat, and has a payload to carry it, if need be. Highest capacity in its class. I have driven it in a full,
unplowed snow storm, and it rides like the roads have zero snow on them. There is no place this truck can not take
you. Compartments for tucked away all over the cab. Hidden from view, but right there. 4 locking "safe boxes"
inside the interior alone. Pop up top storage has place for EZpass, Micro SD if your running a Dash Cam, and want
to swap out memory. Has full Red, Yellow, White plug ins for old school audio video. Right up to brand new USB, or
Bluetooth Inputs. Lot of tech in this truck. Even the center speed display is customizable. You can see real time
360 degree pitch, roll with degrees for every tire position. Very cool setting.

Is truly ready for any actual Off-Road Excursions, and does so in luxury.

The Interior of the Lariat has every option you can want. Fully customizable Infotainment system. Bluetooth,
USB’s in every nook, and cranny. Power outlets. Micro SD Card input. Most high tech Truck I have ever had the
pleasure of owning. Sirius XM Ready, CD, SD Card, USB, Bluetooth. Ford Sync Ready for Navigational real time
traffic updates, weather. Hands Free calling. Touch screen Calendar for your busy schedule. Contact list. Audio
playlist, 911 assist. All of which are accessible either by touch screen center, or steering wheel controls. Not to
mention all of the essential features you would expect of an Ultra Luxury Lariat. Cruise control, vehicle
maintenance reminders, 4 x 4 Pitch in 360 degree live feed. High Resolution Backup camera, with a zoom feature.
Custom made bedliner.

I just put new brakes in the truck,(I have receipts) as the vehicle maintenance reminder made me aware it was time
for service. Great feature, that saves time on maintenance long term. No guessing with this Land Yacht. You can
disable this feature, but I like being reminded when it is time for an oil change, or service in general.