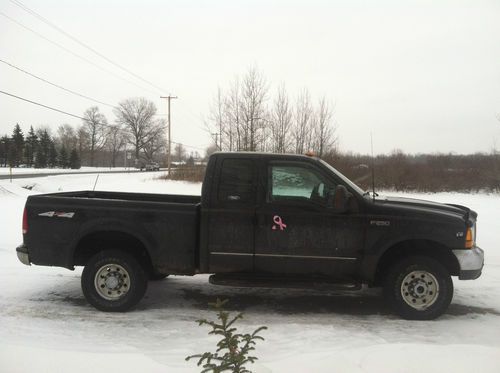 THIS IS A NICE F250 SUPER DUTY EXTANDED CAB PICKUP TRUCK THAT HAS 185,000 MILES ON IT AS OF TODAY THIS TRUCK IS DRIVEN DAILEY AND WILL CONTINUE TO BE DRIVEN UNTILL THIS WEEKEND WHEN I PICK UP MY NEW TRUCK THIS TRUCK TECHNICALLY BELONGED TO MY HUSBAND AND WAS DRIVEN BY HIM BUT EVER SINCE HE BROKE HIS BACK HE CANT DRIVE ANYMORE AND ITS REALLY TO BIG FOR ME TO DRIVE SO WERE DOWN SIZING AND THATS THE ONLY REASON WERE SELLING IT