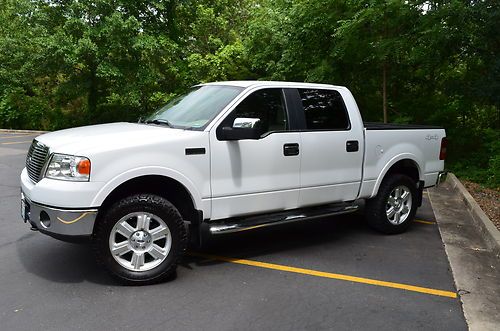 Condition: UsedA vehicle is considered used if it has been registered and issued a title. Used vehicles have had at least one previous owner. The condition of the exterior, interior and engine can vary depending on the vehicle's history. See the seller's listing for full details and description of any imperfections.Seller Notes:"Truck is in excellent condition with light to normal nicks/scratches."

For sale is my 2007 Ford F-150 Supercrew Lariat 4x4. This truck is in excellent condition and is extremely clean inside and out. It runs, drives, and looks great. You would never guess it has 101,xxx miles on it. Mechanically, this truck is flawless. The 5.4 runs great and uses no oil. Trans shifts great and the 4x4 works excellent. Outside the body and paint are in very good shape. There are a few dings/chips in the tail gate from the previous owner. Otherwise, just a few rock chips from daily driving. A leveling kit was installed on the front suspension aswell as air bags on the rear. This enabled me to install a slightly larger tire on the truck, which are in excellent shape. The air bags also keep the ride level in the event you are towing. Finally, there is a spray in bed liner to protect the bed.  The interior of this truck is excellent aswell. There are no stains, rips, tears, or foul odors. The leather is in great shape and everything functions as it should. Cold a/c etc..This thing is clean, clean, clean. The factory subwoofer was replaced with an aftermarket Thunderform amplified unit, sounds great and looks like it came from the factory.

This has been a great truck for me as I'm sure it will be for whomever buys it. I wouldn't hesitate to jump in it and drive anywhere at anytime. Please feel free to contact me with any questions. Thanks for looking.