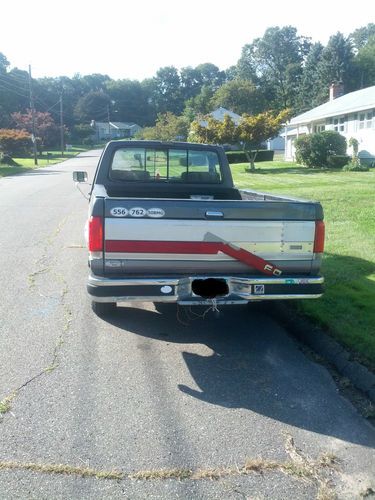 Condition: UsedA vehicle is considered used if it has been registered and issued a title. Used vehicles have had at least one previous owner. The condition of the exterior, interior and engine can vary depending on the vehicle's history. See the seller's listing for full details and description of any imperfections.Seller Notes:"1991 Ford F-150 8' bed DEATH TRAP This thing is a certified piece of crap. half of the options are broken"

The wipers don't work. there is a load on the volt meter when you turn them on but they don't move.

the passenger window is malfunctioning. it requires a push or pull to make it go up or down

the passenger door lock does not function with the lock button

the windshield is cracked, one of the back windows is plexiglas because I was loading up some logs and mis judged the distance

I was standing on the roof to trim a tree and pinched a wire for the dome light and had to pull the fuse. this in turn means the radio has no power. when it worked it sounded terrible any way.

the paint is toast and there are company decals on the doors.

The bumper has a zodiac sticker on it however I have come to the conclusion that they left the boat on the ramp and drove the truck in the ocean because the frame is rusted bad. Not the elegant surface rust, the flaky bad kind.

the tires are old but have tread. there are 3 on the Ford exploder rims and one junkyard rim.  the forth exploder rim is FUBAR. I drove it for two miles with a flat overloaded with concrete.

The brakes are bad, also there was a horrendous set of grooves on the rotors when I replaced the pads. most of the brake lines are new because the old ones exploded. there is a large loop in the line from front to rear and is asking to get snagged on debris.

the engine is original as far as I can tell I routinely overload it and it pulls fine. I have hauled several skids of landscape block from lowes which are said to be 2800# according to the label on them. manual downshift is required if you don't like the smell of burnt brakes. a guard rail will help slow it down if needed. the ford 5.0 had a higher nickel content so they tend to wear less and run strong like bull.

the tranny shifts good. it shifts hard into third if there is not a heavy load on it but its probably the u joints. if it is original its a miracle.

there is a clunk when you step on and let off the gas, im guessing ujoints

I used the bumper hitch to pull rocks and stumps out of the ground with a chain. it is now loose.

The ignition is toast. I ripped it apart because it would shut off in the middle of the road. it turned out to be a connector at the bottom of the assembly which I zip tied. needless to say there is a piece of aluminum you must push to start it. its fully functional down one click for on, push to start. back for acc.

The fuel filters have to be clogged with sediment. when traveling up a hill it will sputter at anything more than idle. after a few seconds it runs ok. on several occasions when driving up a hill I have said out loud to my self that this would be a bad time for it to sputter and it happened with in a few seconds.

both fuel tanks work but the fuel gauge only works on the rear tank.

it leaks a small amount of oil

The engine runs better when the check engine light is on. depending on the weather it idles high and low

the temp guage does not work

Some of the super large rocks I moved to my parents house by using a set of wood ramps a rope and my brothers F-TREE FIDDY. the rock was chained and the rope fastened to the chain. we then ran it over the roof and onto the tow hook of the other truck. we pulled slow at first and when it was lined up I had him ram it home. the rock made it but the rope dented the roof and ripped the passenger side mirror off.

I would not let any one I care about drive it.

This is being sold AS IS

It does not sputter on every hill only some times