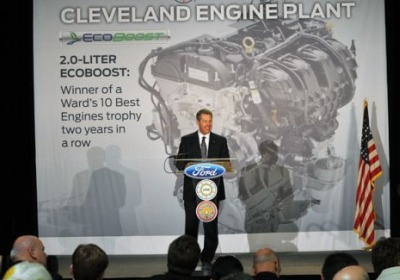 Joe Hinrichs, Ford's President of The Americas (pictured above), announced today that in late 2014, the automaker will be building the 2.0-liter EcoBoost four-cylinder at its Cleveland Engine Plant, a move requiring a $200-million investment and the hiring of 450 new employees. European-built Ford products will continue to source this engine from the Valencia, Spain plant where all of these EcoBoost four-cylinder engines are currently built, and the new Cleveland engines will be used for all North American-made models.

Ford is planning to build its popular EcoBoost engines regionally to maximize production capacity and meet customer demand. Last year, Ford sold 334,364 vehicles with EcoBoost engines in the US alone, and that number is expected to swell to more than 500,000 by the end of this year, with global sales expected to total 1.6 million. By 2015, Ford says that 95 percent of its nameplates will offer an EcoBoost engine.

One such vehicle that could be adding an EcoBoost engine, according to Automotive News, is none other than the 2015 Ford Mustang. The report says that Ford could use either the 2.0-liter EcoBoost or an upcoming 2.3-liter EcoBoost in the sixth-generation pony car.

-Production of 2.0-liter EcoBoost for North America at Cleveland Engine Plant in Ohio to begin in late 2014

"This is our One Ford plan at its best – giving customers the power of choice to decide which fuel-efficient engine is best tailored to their needs," said Joe Hinrichs, Ford president of The Americas. "Cleveland Engine Plant was the first to produce EcoBoost engines and will continue to be a cornerstone of Ford's strategy to deliver affordable fuel economy for millions."

Overall employment at the Valencia plant will not be impacted. The Valencia Engine Plant will transfer some employees to Valencia Assembly Plant to support increased production for C-MAX, Kuga, Transit Connect and Tourneo Connect.

Ford is making the move to assemble engines regionally to help meet rising consumer demand for the award-winning 2.0-liter EcoBoost and to optimize production capabilities around the world.

EcoBoost cornerstone
EcoBoost is the cornerstone of Ford's global engine strategy to reduce fuel consumption and emissions. Ford will expand EcoBoost production to 1.6 million engines this year – nearly 100,000 above the previous target.

The 2.0-liter EcoBoost engine to be built in Cleveland is currently available in the Ford Explorer, Edge, all-new Escape and all-new Fusion, Focus ST, Taurus and new Lincoln MKZ and MKT Livery. The engine has won a coveted Ward's 10 Best Engines trophy each year it has been available in North America.