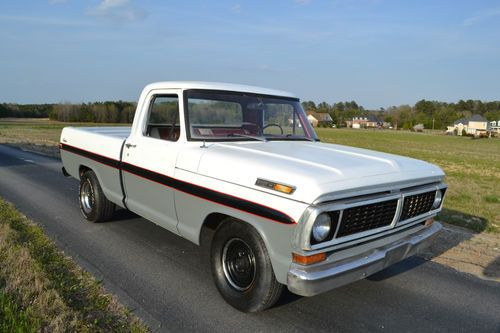 1970 Ford F100 shortbed, 3 speed on the floor, 302, posi rear end, cool little rat rod truck. The body is very solid with  a few dents and dings here and there. From 10 feet it looks awesome. New paint could use a wetsand and buff and is more of a lowgloss satin at the moment, although it will buff to a high gloss if you want it that way. New starter, newly rebuilt carb, new points, condensor and distributor cap, new valve cover gaskets, new battery, fresh oil, new clutch and flywheel, lowered 3.5 inches in front, The interior is ok with no rips in the seat a good headliner and door panels. The dash pad is cracked and everything could use a little cleaning. Its a good driver and all the hard work is done. The transmission used to be on the column and the shifter is still there but I remove it if the buyer wants it gone.  This sin't a show truck it is a driver and still has things here and there to do, although it rides and drives fine. It starts up on the first turn of the key everytime and everything mechanical has been addressed.