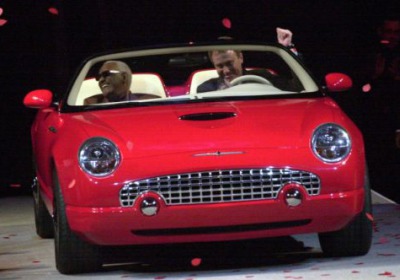 Mays is by far not the first designer to use heritage design cues in his work.

The announcement that J Mays will be leaving his chief creative officer role at Ford Motor Company on January 1 ends a 13-year run in one of the industry's top design roles. While best known for having a hand in reborn classics like the Volkswagen New Beetle, Ford Mustang and Thunderbird (above), Mays' legacy is more complicated and nuanced than being considered the father of what is known as "retrofuturism".

Although he may have coined the term, Mays is by far not the first designer to use heritage design cues in his work. In fact, a case could be made that Bill Mitchell, the chief of design for General Motors from 1958 through 1977, was the first to incorporate classic styling motifs in modern cars as evidenced by the Bugatti Atlantic influences on the 1963 split-window Chevrolet Corvette, the Auburn Speedster boattail on the 1971 Buick Riviera and the Bentley bustleback on the 1980 Cadillac Seville.

But, Mays can be credited with identifying this practice and calling it retrofuturism. Therein lies J Mays' genius – he was able to capture the spirit of the times, whether it be nostalgia or a fascination with the new and embody it in car design.

He was briefly a journalism major at the University of Oklahoma.

Where his predecessor Jack Telnack was known for developing the aero look and his contemporary Tom Gale was responsible for the cab forward design, Mays wasn't like other designers looking to develop a new form language. Instead, he sought to use the shape itself as a form of communication.

This may be due in part to his background. While he received a degree in transportation design from the Art Center College of Design in 1980, he was briefly a journalism major at the University of Oklahoma.

For Mays, design is not just about the object itself. Instead, the object is a canvas on which to visually tell a story about what the vehicle does, or what it represents to its maker, or what it says about its owner. And that's an approach that works with both heritage-inspired vehicles, like the stunning Audi Avus concept (above) that put him on the map in 1991, to contemporary vehicles like the Ford 427 concept (below). The Avus told the story of the Auto Union record cars from the 1930s in a flowing shape formed out of polished aluminum. The 427, on the other hand, was a contemporary concept that used a three-bar grille motif to convey a strong American personality. That bold grille theme found its way into production and was used across Ford's car and truck lines before the new European-inspired look took hold.


Mays' other gift was an ability to surround himself with talented designers who could bring these stories to life.

Mays also extended his storytelling abilities to not just the cars themselves, but also the press kits, show stand designs and the videos used to present both concept and production cars.

But beyond redefining design as an alternative form of communication and story telling, Mays' other gift was an ability to surround himself with talented designers who could bring these stories to life. Moray Callum is an eminently able successor, but the two designers who should be credited most for Mays success are Freeman Thomas and Martin Smith. Both Thomas (who heads Ford's advanced design studio in California) and Smith (in charge of Ford of Europe design) have worked with Mays as far back as the Avus. Thomas is the creative genius behind many of the concepts, while Smith has, over time, developed the kinetic design philosophy from Europe that is now being used globally on Ford product.

In a way, Mays' retirement timing is impeccable. Even though he is responsible for a full range of designs from retro to futuristic, the cars he is most associated with are those tapping into heritage like the Beetle, Thunderbird and Mustang. If the all-new Mustang about to be revealed is received well with a fresh, contemporary look that offers a distinct break from the past, it will be proof positive that Mays and his legacy are much more than just retrofuturism.