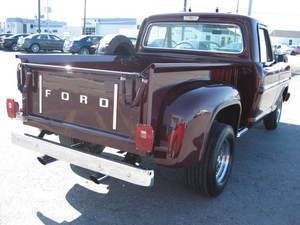 UP FOR SALE IS A VERY NICE 67FORD F-100 STEP-SIDE PICKUP.THIS TRUCK WAS  GROUND UP REBUILT IN 1991 AND RUN VERY LITTLE. IT WAS GARAGED FROM 2005-2012 AND WAS RUN TIME TO TIME TO KEEP IT UP.WAS TOLD IT WAS A 351 CLEVELAND BUT I KNEW FROM HAVING A LOT OF FORDS IT WAS AN FE ENGINE NOT A 351 IT HAS 352 STAMPED ON FRONT OF BLOCK AND AFTER A LITTLE RESEARCH FOUND OUT MOST FE'S HAD 352 ON FRONT EVEN 352 360 390 406 427 THEY ALL USED SAME BLOCK. LATER ON FOUND THE ENGINE TAG IT IS A 1968 390 FE. YOU CAN TELL BY LOOKING THIS TRUCK HAS BEEN RESTORED, ALL NEW BOLTS NEW HEAVER SPRINGS. SIT'S PERFECT EVEN KNOW ENGINE IS HEAVY. MANY NEW BODY PARTS SOME POWDER COATED UNDER HOOD. ALL NEW INNER FENDERS RADIATOR SUPPORTS ALL POWDER COATED, EVEN HORNS AND JACK. HAS HEADERS AND NEW DUEL EXHAUST,INSIDE CAB IS ALL ORIGINAL ALL GAUGES WORK PADDED DASH( NO CRACKS) SEAT LIKE NEW NEW STEERING WHEEL HORN RING ALL NEW. SPEEDOMETER SHOWING JUST UNDER 3,OOO MILES (TRUE MILEAGE  UNKNOWN) I BELIEVE THIS WAS PUT IN WHEN IT WAS RESTORED I THINK HE HAD WHOLE CLUSTER RESTORED ,SO I'M GUESSING THIS WAS MILEAGE SINCE REBUILDING.I JUST DROVE VEHICLE 300 MILES RAN GREAT IF DON'T SELL I WILL ADD POWER STEERING THIS IS A GREAT LOOKING ALL ORIGINAL NOT CUT UP OR COBBED UP I COULD GO ON AND ON. NOW THE PROBLEM AREAS AND THERE NOT MUCH.HORN DOES NOT WORK I BELIEVE ITS BECAUSE EVERYTHING INCLUDING HORNS ARE POWDER COATED AND NOT MAKING A GOOD GROUND EASY FIX 1 EXHAUST HANGER NEEDS TO BE TACK WELDED BACK TO FRAME EASY FIX SPEEDOMETER ABOUT 15 MPH OFF AT 55 PROBABLY JUST GEAR IN TRANSMISSION THE TRUCK HAS A FEW BUBBLES IN THE USUAL PLACES LOWER FRONT FENDER AND BOTTOM RIGHT CORNER OF CAB IT'S BEEN SINCE 1991 SO IM NOT CONCERNED NOT TO NOTICEABLE IF I KEEP IT IT WILL BE FIXED ITS NOT TO BAD PS DID I  MENTION IT HAS A NEW OAK BED AND CUSTOM FORD WHEELS  REMEMBER YOU GET WHAT YOU PAY FOR THIS IS A NICE ORIGINAL TRUCK THANKS FOR LOOKING BUYER RESPONSIBLE FOR SHIPPING AS WITH ANY OLD VEHICLE IT IS SOLD 'AS IS' VEHICLE NYS INSPECTED AND READY TO GO