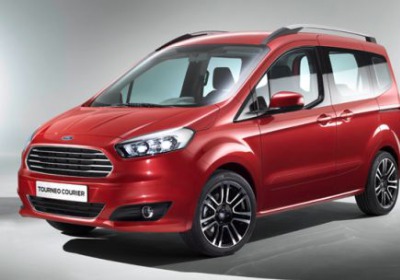 This week Ford rolled out the 2014 Transit Courier, the fourth addition to its Transit range. Ford says its the first time for the nameplate in the compact van segment.

"Ford has now completely transformed its commercial vehicle line-up, with four all-new, class-leading Transits for European customers," said Barb Samardzich, vice president of product development for Ford Europe. "With the all-new Transit range, we expect sales to grow to 400,000 units per year by 2016, well over 50 percent more than we sell today."

When the Courier goes on sale in the Spring of 2014, it will offer more than 1,400 pounds of payload capacity, multiple mounting points for racks or other framework and a rear cargo area that can carry items 5.3 feet-long. An optional folding passenger seat boosts the cargo length to 8.5 feet.


"With 10 percent more load volume and floor area than its closest competitors, the all-new Transit Courier brings a new level of productivity to the compact van segment," Samardzich said in the press release.

Three engines will be available in the Courier with start-stop optional with all of them. First there is the choice between the two Duratorq TDCi diesel choices: a 1.5-liter, 74-horsepower and a 1.6-liter, 93-horsepower. A step up from that would be the 1.0-liter EcoBoost gasoline engine with 98 horses.

Pricing on the 2014 Transit Courier hasn't been announced yet and Mike Levine, Ford's truck communications manager, tells us, "There are no plans to bring Transit Courier to the US."

Read the official press release below.

Offering class-leading loadspace, running costs and safety features, the Transit Courier is the smallest member of the all-new Transit range, and joins the Transit Connect, Transit Custom and Transit in the most comprehensive ever line-up of Transit vehicles.

"Ford has now completely transformed its commercial vehicle line-up, with four all-new, class-leading Transits for European customers," said Barb Samardzich, vice president, Product Development, Ford of Europe. "With the all-new Transit range, we expect sales to grow to 400,000 units per year by 2016, well over 50 per cent more than we sell today."

The Transit Courier goes on sale in spring 2014, when all four new Transit models will be available in European showrooms. The line-up will also include the spacious new high-roof version of the Transit Custom that is also revealed for the first time in Birmingham.

Ford's renewed commercial vehicle range is completed by the new Fiesta Van and new Ranger, winner of the International Pickup Award 2013 that joins the Transits on the Birmingham stand.

Based on Ford's global B-segment platform, the Transit Courier delivers class-leading load volume of 2.3 m3 (SAE) with standard full bulkhead within an overall length of 4.16 metres, and offers the agile handling and manoeuvrability of a compact vehicle. The load compartment offers best-in-class features including:

With a generous load volume and maximum payload capacity of 660 kg, the Transit Courier can accommodate a wide variety of cargo and equipment, including a standard Euro pallet. Kombi versions offer flexible 60/40 split folding rear seats with a tip/tumble mechanism for additional versatility or dual business/personal usage.

"With 10 per cent more load volume and floor area than its closest competitors, the all-new Transit Courier brings a new level of productivity to the compact van segment," Samardzich said. "This is a stylish, practical and affordable new van that businesses will value for its agility and exceptionally low cost of ownership."

The Transit Courier will be available with highly-efficient diesel and petrol engines that target best-in-class fuel economy, and offer Auto-Start-Stop on all units. Customers can choose between 1.5-litre (75 PS) and 1.6-litre (95 PS) Duratorq TDCi diesel engines, and the remarkable 100 PS 1.0-litre EcoBoost petrol engine, the "International Engine of the Year" 2012.

The cabin offers an ideal mobile-office environment, with smart stowage including a "mega-centre" console capable of storing A4 documents and small laptops; overhead stowage; and a storage drawer under the driver's seat. A device dock in the centre of the instrument panel enables occupants to store, mount and charge mobile devices including phones and satnavs.

Smart design and engineering ensure the new Transit Connect delivers best-in-class load carrying ability. A load-through hatch in the bulkhead and fold-flat passenger seat enable long loads up to 3.0 m (L1) and 3.4 m (L2) to be safely carried in the vehicle. In addition, a multi-fold dual passenger seat now enables van models to carry up to three people in the cab.

The Kombi and Double-Cab-in-Van models offer seating for five, or seven in the L2 Kombi model, and deliver flexible rear seat configurations with a movable mesh bulkhead. The L2 model also offers a unique fold-flat seat capability that optimises loadspace from the front passenger seats rearwards and accommodates loads of up to 2 m.

The Transit Connect targets best-in-class fuel efficiency offering an improvement of up to 30 per cent over the current model; as well as reduced cost of ownership through minimised maintenance and repair costs with extended service intervals.

The powertrain line-up includes the highly-efficient 1.6-litre Duratorq TDCi diesel with a choice of 75, 95 and 115 PS, and the 100 PS 1.0-litre EcoBoost petrol engine, as well as a version of the acclaimed 1.6-litre EcoBoost engine that is available with a six-speed automatic transmission. Ford ECOnetic Technologies that help to minimise fuel consumption include Auto-Start-Stop and Active Grille Shutter.

Unlike many rivals which are tested like passenger cars, the all-new Transit Connect has been subjected to Ford's ultra-stringent commercial vehicle testing and durability standards, covering millions of miles of arduous testing in laboratories, at proving grounds and on customer fleets.
The all-new model also builds on the Transit Connect's reputation for outstanding security: the improved remote locking system now offers two channels for enhanced security and can be fully configured to the customer's needs, while anti-tamper shielding of the door lock latches prevents destruction of the locks by drilling or chiselling.

The new model offers a stylish cockpit with car-like design and craftsmanship, smart stowage solutions, and the latest Ford driver assistance features and interior technologies. Transit Connect is the first in its class to offer Active City Stop and Tyre Pressure Monitor, and features Ford SYNC with Emergency Assistance. Deliveries are due to start by the end of 2013.

All-New Transit Custom The all-new 1-tonne Transit Custom "International Van of the Year 2013" now on sale across Europe is the first vehicle in its segment to achieve a maximum five-star Euro NCAP rating. Now Ford is adding a spacious new high-roof version which makes its global debut in Birmingham.

This provides customers with an extra 370 mm of height in the load compartment, increasing the distance from floor to roof to 1.78 m. The high roof option is available on both SWB (L1) and LWB (L2) versions to create a class-leading maximum load volume of 8.3 m3 on the larger model.

Customers can specify the high-roof with the same wide range of gross vehicle weight and powertrain options as the standard roof model, and in van and kombi bodystyles. The high-roof model will be available for customer delivery in the last quarter of 2013.

The all-new Transit Custom offers class-leading load-carrying ability, and innovative loadspace features including a load-through hatch in the bulkhead for extra-long items, and the integrated roof rack available for the low roof versions which can be folded away when not in use for better fuel economy while keeping overall vehicle height under two metres (except 330 GVM models).

Class-leading fuel economy with CO2 emissions from 159 g/km* for the ECOnetic versions is delivered by the improved 2.2-litre Duratorq TDCi diesel with Auto-Start-Stop, while cost-of-ownership is further minimised by the longest service intervals in the class at two years/50,000 km/30,000 miles.

Compared to the outgoing Transit, Ford has increased load volume by around 10 per cent model-for-model, with the largest "Jumbo" van now capable of swallowing up to 15.1 m3 of cargo. The all-new SuperJumbo Chassis Cab will accommodate 5 m floats or box bodies.
The all-new Transit delivers minimised maintenance, repair and insurance costs, and targets best-in-class fuel economy. The latest 2.2-litre Duratorq TDCi diesel is offered with 100 PS, 125 PS, and 155 PS power ratings, and a standard 6-speed manual transmission. Front-wheel drive, rear-wheel drive and all-wheel drive versions will be available.

An all-new interior, with a stylish and functional instrument panel, incorporates a range of smart stowage solutions. The cabin is significantly more spacious than the outgoing model, with increased shoulder room, head clearance and visibility, plus a more comfortable driving position with a fully-adjustable steering column. A wide variety of advanced technologies can also be specified, including the Ford SYNC with Emergency Assistance, Rear View Camera, Adaptive Cruise Control and Lane Keeping Alert.

Alongside the Transit Custom and Transit Connect models, the all-new Transit has been subjected to Ford's ultra-stringent global commercial vehicle testing and durability standards, covering millions of miles of arduous testing in laboratories, at proving grounds and on customer fleets all around the world. This is even more significant with the new model, as for the first time ever the all-new 2-tonne Transit will be sold in the North American market where it will eventually take over from the best-selling E-Series range.