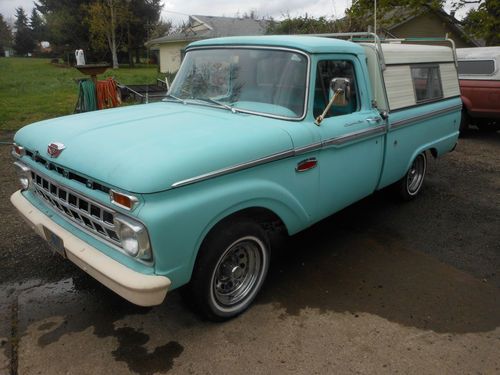 Barn find 1965 Ford F100 Twin Beam Custom Cab Short bed, V-8 352, 3-speed on the tree. Elderly man only used this truck as a fishing truck. He had previously had lots of work done to it in 1992 thru 1995 including motor rebuilt, new muffler and exhaust, air shocks, gun rack, hat rack, interior redone. Has CB FM radio hooked at bottom of dash.  Original radio still works. Slide in receiver with electric breaks for towing capabilities.  Lights work, blinkers work, heater works. Good tires, rims have a little surface rust. He used truck again as only fishing truck after all the work, had new paint but has faded and chipped after 18 years which is normal, but there are no dents.  Does have a few surface rust spots and the only rust hole is in the hood which is approximately 1" x 4", also has couple of rust bubbles on passenger door. Otherwise truck is pretty much rust free.  Inside bed is in great shape no dents just scratches as he used it to sleep in when he was fishing.  This truck has lots of receipts from all the work he had done in '92-'95.  The truck will need to be repainted again. Runs and drives great so don't pass this rare find up!!

YOU BID, YOU WIN, YOU BUY AND AS IS

IF YOU HAVE 0 OR LESS FEEDBACK PLEASE CONTACT ME BEFORE BIDDING.