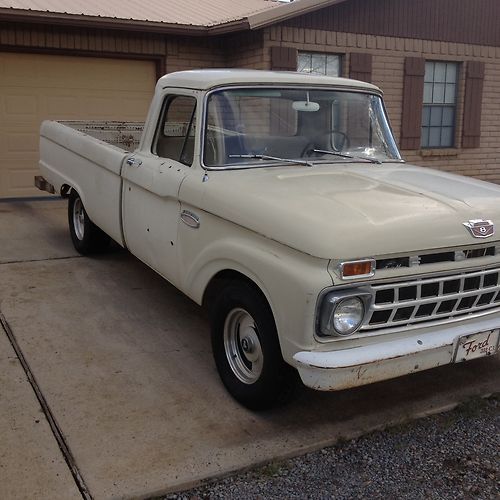 You are bidding on a 1965 Ford F-100  long box custom cab twin I-beam  352 v8  4 speed manual transmission  w granny low and 95k on odometer. I bought this truck with the intentions of using it as a advertising tool for my business but plans have changed  as I'm unable to store this truck at my residence  due to neighborhood  covenants .  I'm no mechanic  but will do my best to describe this truck to the best of my ability.  This truck runs and drives I drove it home after putting  $6 in gas in tank it  Does not run good it burns some oil and was a noticeable what I believe to be a lifter tick coming from passenger side. Motor definitely will need some work but like I said it does run and start and will stay running on its own . The gas tank was supposedly  cleaned out by previous  owner  because truck had been sitting for some time it has a strong varnish  smell  I have since ran gas from gas can  directly to fuel pump as I don't trust the tank being clean.  Headlights, wipers and fan all seem to work blinkers do not I don't think brake lights are working . All glass  is good and no cracks. Missing door panels on drivers side,ash try, and other items See pictures. Has rust in floorboards  previous owner had removed vinyl  floor mat. Remainder of truck is very straight some damage on passenger door from some  mirrors that must of got caught on something . You can see a difference in colors on truck  the neighbor boy has tried to wax  those  spots he might finish the job but I cannot guarantee this. This is defiantly a  good truck to restore  as I planned to do  but I'm just unable to have it sitting in my driveway  so I hope it will find a good home and brought back to its former glory. If you have any questions or need more pictures please call me at 575-534-9089