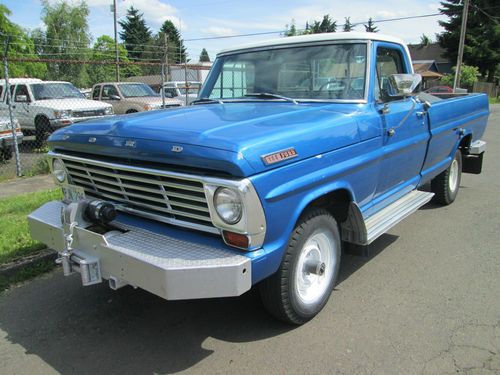 Condition: Used: A vehicle is considered used if it has been registered and issued a title. Used vehicles have had at least one previous owner. The condition of the exterior, interior and engine can vary depending on the vehicle's history. See the seller's listing for full details and description of any imperfections. ...
WORLD WIDE AUCTION!
NO RESERVE!
1967 Ford F-100 4x4 Long bed
4-speed manual 390cu V8
manual locking hubs
runs and drives great!
paint is in good shape
original oregon truck
clean title
manual choke
true survivor
winch is in working order
interior is in good condition, no rip or tears, door panels are in good shape,
restored a while ago
could use some new rubber.
no leaks
does not smoke
strong running truck
fires up every time
i have original ford hub caps for this truck.
adult owned all its life.
any questions?
give me a call
(503) 490-0256
NOTE: if you have "ZERO" or "NEGATIVE" feedback please contact me before placing live action bid
This truck is sold AS-IS
Deposit is non refundable
$500 dollar deposit due via paypal within 24 hours after sale, and remaining balance due via bank transfer or deposit.
buyer is in charge of pick up or shipping of the vehicle.
i have all rights to end my auction early if the price is right.