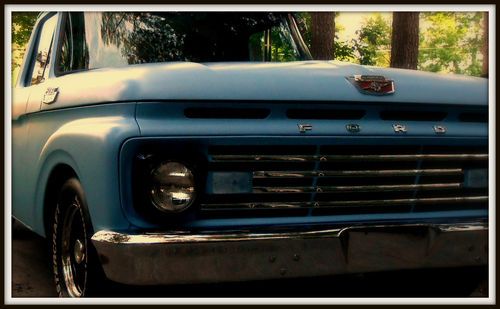 1963 Ford F100, Original I-6 223 cu in, Original Four Speed on Floor, Ford 9" Rear Axle, Four wheel Drum Brakes, Manual Steering.  Truck has been lowered for an aggressive stance and is over 90% restored.  New Paint "Hot Rod Flatz Baby Blue" w/ black trim.  Engine has been professionally rebuilt with all new pistons, complete valve job, new carb, runs perfect.  Brakes have been completely rebuilt, rear axle has new wheel bearings and seals, new front wheel bearings as well.  Trans had no problems cleaned and reinstalled.  This is a must see truck, will get lots of attention, only thing left to rebuild is the side windows.  Needs new runs and rollers, about 250 in parts.  I can finnish this if you request.  If you want that finnished let me know, we can make a deal.  The truck has two seat covers vinyl cover under fabric is in great shape, like new.  Body has been completely restored, good by amatuer standards, not chip foose quality.  The truck drives great, I believe you will be surprised at how well this old original truck drives.  If you have any questions please ask.  May be interested in trade, send some good pics and info, if i like what you have we can come up with a cash value that you can bid with.  Will not end auction early.