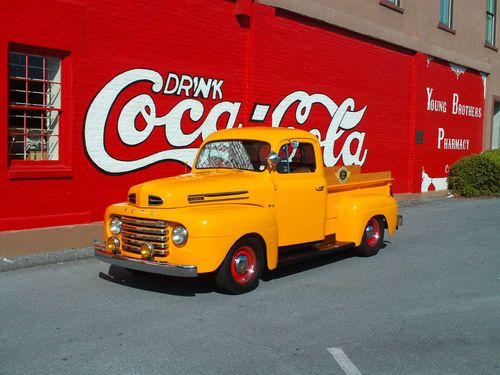 i am selling my 1948 ford -1 pick up that i  drive a lot. this truck has been to the lone star round up in april, to fla., ga., ala., miss., tx., la., tn., ky., without any problems at all. it gets 24-26 mpg on the highway and about 19-20 in town. 6 year build all by me, here are the details;
all rust was cut out in fenders and lower cab corners and replace with new metal
yes there is body filler, its 65 years old.
305 c.i. ho chevy small block from early 80's truck
5- speed trans from a 3rd gen camaro, custom built hydralic clutch set up all custom made by me, using original pedals in floor
all parts are new;
comp cams and lifters, thumper series
edelrock intake
holly, with electric choke that works
block hugger headers
full dual exhaust to fear using thrush turbos
new 22 gal 70 model mustang tank in rear under bed
manual steering, drum brakes, working e-brake( the steering components are all new and work very well)
all new bumpers, grill chrome, ect
new firestone radials, wheels, caps, trim rings
front are 5x15 wheel, 225/70/r 15
rear are 7x15, 265/70r 15
new headliner
dina mat floor
sids dropped 3 inch axle with new kingpins and bushings
new 2 inch reversed eye dropped mono leaf front springd
every other leaf on rear removed
new monroe shocks all around, air on rear
all new custom built by me wiring harness with late model style fuses
spot lite works
fog lies work
turn signals, custom 3rd brake lit
box in bed is a after market for a early chevy coupe. it has a new delco batt. in it and my jack and tools
new spare tire
the paint is single stage ppg wheatland yellow, interior is a ford color as is wheels, bascoat clear coat
new kenwood am/fm cd, 4speakers, and a remote 10 disc cd player behind seats
the only thing not finished is the seats, just havent got around to getting them covered.
front and rear sway bars, handles great in curves, lays flat
i drive this truck, ran or shine, ( new electric wipers, 2 speed), sun tach, gauges. the original gauges are converted to 12v with a ron francis vr-1 reducer. the fuel gauge works, the speed ometer works( 10 mph off), extra firewall mounted oil pressure gauge, also new hei distributor, starter and alternator
cowl vent works
all new glass and rubber, door handles, EVERYTHING!
truck rides firm because of the monoleafs and sway bars, sets right. steering wheel has ben cut down from 17" to about 15" so your gut will clear it
i will provide new side bards with no decals on them unless byer wants it left as is
this is a old truck, it has a rattle and squeak here and there on rough roads, but very little.
i am not going to give this truck away, and not hurting to sell it. this truck needs nothing. you can buy it and drive it home. april 3rd we left for austin, tx. for the lone star round up ,2100 miles not the first problem. if it does not sell, i will be at the nhra reunion in ky. in june in it. i probalby have left out a few things, any questions, let me know.