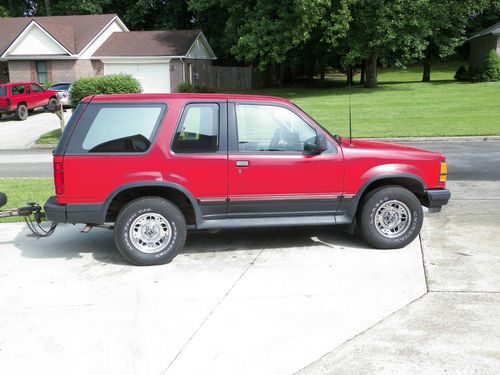 You are bidding on a 1994 Ford Explorer Sport. I am the 2nd owner and it has spent the majority of its time in the Southwest (New Mexico and Southern California) and is virtually rust-free. The previous owner was a stickler for maintenance as I am, so it has been well maintained with the exception of the A/C. The compressor locked up last year, and because it is a secondary vehicle for me and I don't use the A/C that often anyway, I didn't spend the money to have it repaired. The only other mechanical defect that I can think of is with the rear wiper motor - the teeth that engage the arm are stripped and the motor will need to be replaced to remedy that. It was that way when I bought it and I didn't care so I didn't replace it. Aside from those two issues, it is an EXCELLENT vehicle. I drove it from Baltimore Maryland to my home here in Kentucky and averaged 26 mpg...I couldn't believe it! It starts and drives well. It is a 5-spd manual transmission and shifts well. The tires are in very good condition and should last for many more thousands of miles. It does have a small dent above the passenger side rear wheel opening. The paint is not broken so it may be able to be repaired without requiring repainting. I have represented it to the best of my ability. Please ask any questions before bidding. If you're able to test-drive it before bidding, I would welcome it. You won't be disappointed. Bid to WIN!