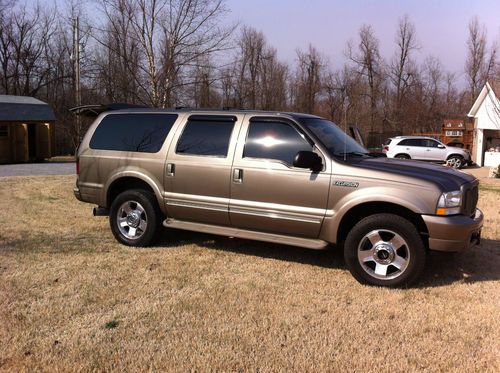 2004 Excursion Limited.  Mineral gray in color with 2 tone tan/brown interior.  It has the Quad seating, so buckets in the middle instead of the bench seating. It has the 6.0L V8 Powerstroke Diesel engine.  Engine upgrades are a Quadzilla progammer,Synergy transmisson cooler, and Airaid Cold air intake.  It has 182,000 miles, which is nothing on these engines.  Take care of it, and it will easily get 400,000 to 500,000 miles.  This is my daily driver, so mileage will change. The last road trip I took, I got 19.7 mpg with the cruise on 80.  It gets good mileage for as big a vehicle as it is.  Everything works as it should. Engine is strong. 4wd goes in and out flawlessly. DVD player works great, and I have 4 sets of wireless headphones that will be included.  All service and fluids are up to date.  Currently, the truck is about due an oil change,and I will have that taken care of before you pick it up.  I will have the fuel filters changed as well.

The truck is 9 years old.  It's not flawless, but in very nice shape for the age and miles.  There are a couple of door dings, and normal scratches in the paint.  I have included photos of those. There is a tear in the fabric on the back of the 3rd row seat, and a small section of tint on one of the rear windows was scratched off by my 5 year old. It is barely noticeable outside of the vehicle. One small hole in one of the middle seats. Wheels have been upgraded to a newer wheel from an F250.  They are 20" chrome Ford factory wheels.

Any other questions, please feel free to send me a message on here, or call/text 270-705-0815.  Located in Western KY. It is also for sale locally, so auction may end early.