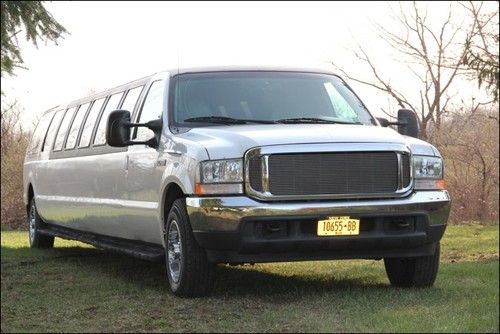 7.3 Diesel Powerstroke !!!!! RARE  ONLY 98,000 miles!!!!!
One of the better builders in the industry has build this 2000 Ford Excursion ... It is the most looked for motor in the limo world which helps it to get great MPG.. One a few out there of its kind!!  I have had the limousine in my fleet for 8 plus years. It is a RARE unit and a money maker. The unit needs nothing Mechanically equip with 7.3 Diesel always serviced and maintained. The Limousine has some areas of tlc needed however can run now and generate revenue and repair later. This unit was Certified and DOT measured for 22-24 Passengers. The bad is the body is starting to show bubbles and flaws and will need some touch up and under windows. It has recently recieved a Paint jod however the body work is not the greatest. But dont get me wrong it is nice. ALL NEW LOWER ROCKER PANELS welded in. The interior is very unique to its year and kinda. It has a nicer interior than most units its age.
It has BRAND NEW:
4 -COOPER tires and Rims
Frontend Complete rebuild with Airbags
Wheel Bearing
Brakes and rotors
Many other new parts!!!!!!
ONLY reason for selling is my new limousines are built and in and have to sell to make way for them.
If you have any Question please feel free to call me 716-863-7559 open to trade
MOTIVATED SELLER!!!! MAKE ME CASH OFFER!!!
CAN SEND YOU MORE PICTURES
ALSO IF NOT TO FAR CAN HELP FACILITATE DELIVERY