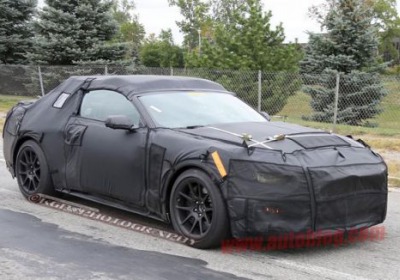 Details about the next-gen Ford Mustang are scarce, and there's even less information out there about the upcoming replacement for the Shelby GT500. Previously rumored to drop the Shelby name and wear the GT350 moniker, the highest-performance Mustang has just been spotted testing near Ford's SVT operations.

Despite being cloaked in heavy camouflage, we can instantly tell this prototype is different from other Mustang spy shots we've seen in the past. Aside from the Shelby-spec wheels, quad exhaust outlets (previous spy shots show only two) and beefier brakes, this car also has air intakes on the hood and front fenders. These elements help to neither prove nor dismiss rumors that the next SVT Mustang will be naturally aspirated. It also looks like Ford is may be planning some changes to this car's rear suspension, as there is some extra camouflage added beneath the rear end of this prototype.

As a bonus, these spy shots also give us our first look inside the new Mustang, revealing a new steering wheel (with more buttons) and a glimpse of the dual-pod instrument gauges. Check out past spy shots of the 2015 Mustang showing off its new face and driving around town.