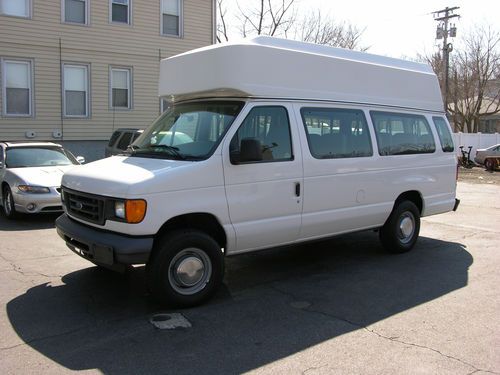 You are bidding on a 2006 Ford E-350 high top wheelchair van with only 54000 miles. This van is a one owner used by a local non profit group. This is a Braun Paratransit van that can carry 10 people or 4 wheelchairs. It has a 30 inch raised roof, a 60 inch raised lift door with a century series automatic lift gate. It also has a ceiling mouted rear air conditioning and a floor mounted rear heater and is also equiped with a backup alarm. This van is in great shape with one small scratch behind the drivers side rear wheel. We are a Connecticut used cardealer and will need to collect 6.35% sales tax from Connecticut residents. All others to pay tax in there own state. A $149 dealer conveyance fee must be added to the final price. Any question call Mike at 203 732-0069