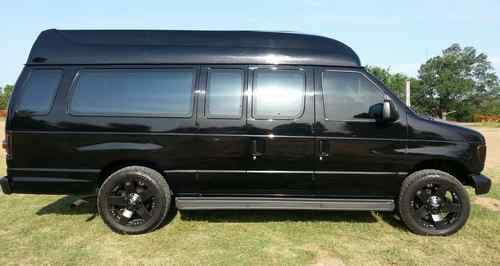 WOW, what a van do we have here. First lets start with the basics, this is a 2006 Ford E-250 Extended Cargo Conversion Van. I do not know who did the conversion, but it has an extended rear section and a high top section. Everything works to my knowledge and runs excellent. No smoke, no funny noises, no issues. New battery installed and alternator replaced just a few weeks ago.

Now to the good stuff.... We recently installed brand new 20" KMC Rockstar wheels and Nitto Terra Grappler tires which have less than 500 miles on them. This wheel/tire set cost over $3000. The van has upgraded healights, taillights, grill, bumpers, stereo system, huge DVD screen, wireless headphones, custom lighting, custom alarm, custom glass top desk that actually raises and lowers by a push of a button. The van has tons of storage and a massive amount behind the backseats, as that is where the extended section begins.

This van has a total of eight, yes, eight plush leather captains chairs. The leather is in very good condition, with the exception of the drivers chair which has some tears and wear. This van actually has a separate entire rear A/C system that will freeze you out, it is overkill, but that is a good thing!

This van would be perfect to wrap you company advertising on, great for a radio station, perfect for a limo van, the list goes on and on......

You won't find another van like this, this nice, will all these extras, for this low price!

I have title in hand, it is clear, but it does note *odom discrep. It simply means at some point, the odometer did not jive from title to title, this happened sometime before I owned it. I simply had the van inspected when I purchased it and everything looked fine. Its not like you are buying a 2012 van with hardly any miles, if that was the case, yes, an odom discrep might be an issue... not with this van.