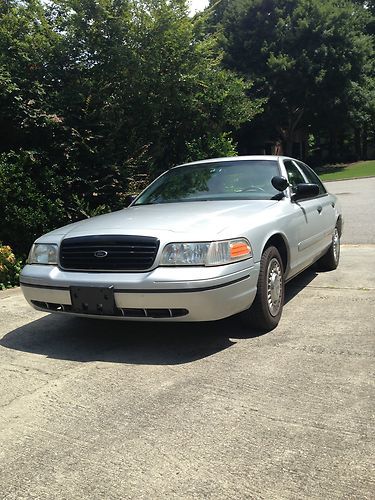 Condition: UsedA vehicle is considered used if it has been registered and issued a title. Used vehicles have had at least one previous owner. The condition of the exterior, interior and engine can vary depending on the vehicle's history. See the seller's listing for full details and description of any imperfections.Seller Notes:"No missing parts on the vehicle, it shows Kilometers on the instrument panel, 28,082 kilometers which is around 17,400 miles. Although the car looks and behaves like new, it is NOT NEW. If you take the magnifying glass you will probably discover a few surface scratches, inside it still has attached on the floor the metal bar that they had the radio/computer mounted, and on the right side of the windshield vertical plastic cover inside, it has 2 small holes hardly seen (less than 1/8") that they probably had their camera mounted. I will probably stick on top of them 2 small washer buttons by the time it sells. Although the car has a police interceptor emblem in the back left of license and the search light in front and it was a vehicle owned by a police detective, it even has the police interceptor section in the user manual (see pics and title search) someone brought to my attention that the vin # is not the police interceptor, so although it looks like PI, it probably not."

This is a perfect extremely comfortable car that shows kilometers in the odometer (Canadian model) with around 17,400 ACTUAL MILES!!!. It was acquired from a police detective with minimal usage, and was sitting parked for over 10 years at my friends garage in Maryland. The vehicle now is in Alpharetta , Ga and has new tags and is driven by me or my wife. If you are the type who uses "common sense" vs. "book values", the type that likes newer cars and can probably afford one but looks to save money getting one that feels new with the lowest miles possible for the year, if you like a car that is the most comfortable for the money and you don't want to take a big $$$ loss buying a new one, and if you like the fact that most drivers around you will "behave" ...and when you are on the highway driving in the most comfort going to your vacation spot most cars in front of you will move out of your way, or if you happen to drive in a high crime neighborhood all "up to trouble" guys will instantly disappear from your path, then this car is for you. You will be a very very happy owner. (I am talking from personal experience here :-). I never felt safer in a bad part of town when I drove this Vic to see some houses for sale and when I took it to Florida on a trip last month with the family it was so comfortable the time flew by very fast and we were not affected at all by the long trip, and it was funny on the highway to see great behavior from other cars obviously thinking that we were the police :-).You will not find another car like this beauty with such low miles, I had listed it one time before and was not planning to re-list it if it didn't meet my reserve, but the time has come to give it another shot as I need to get my 2 teens 2 smaller cars ASAP and this beauty will have to go to a good home. This is one opportunity to get a $22,000 car that still looks, feels, and drives like new, for less than 1/3 the price. This car is a keeper and a smart owner who can afford it will enjoy it for the long time to come.New tires (around 4 months less than around 800 miles on them), new battery, new fuel pump and plugs, new transmission oil and filter and new engine oil. ITS PERFECT!

I am reserving the right to cancel all bids prior to reserve been met, and sell it locally as I have it posted in another site. I also reserve the right to close the auction early and sell it to the highest bidder that met the reserve. Will not disclose the reserve, do not ask.
Inspections are encouraged and welcomed any time in opt. north (of Atlanta), in Alpharetta GA close to exit 10 off 400.
Good luck and thank you.

The vehicle shines as a new one. ATTN:! on the 3rd pic the black dots are from my camera, the car is spotless. Sorry about that. Also, the speedometer shows top speed of 200 km/hr as you can see from the pics. Feel free to contact me with any questions.

I just clicked on the ebay link for the vehicles full history report, I paste it here.
Again, keep in mind, the miles shown below are actually kilometers!!! I measured it on the highway, the odometer shows kilometers for sure so this car has less than around 17500 actual miles.
I had been asked before if the vehicle has any rust. The sheet metal doors, underneath etc has absolutely not any rust spots anywhere. The paint over and under is still shines. It does have some surface rust over some bolts etc, and some surface rust on the main frame, but nothing you don't see on even new vehicles after they are driven for 5 months.  This car is very well intact and the exhaust is stainless!!. Also, the wheel hubs are METAL!! chromed and shinny!!  :-).