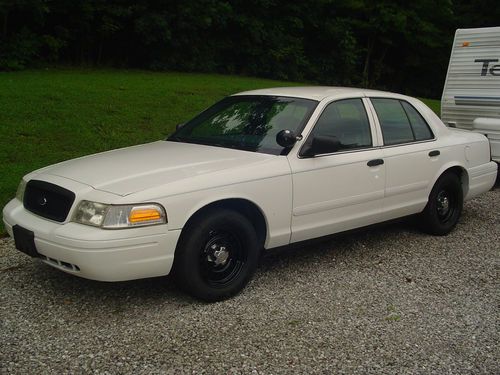 Condition: UsedA vehicle is considered used if it has been registered and issued a title. Used vehicles have had at least one previous owner. The condition of the exterior, interior and engine can vary depending on the vehicle's history. See the seller's listing for full details and description of any imperfections.Seller Notes:"Runs and Drives great with no mechanical issues, only cosmetic paint imperfections."

I purchased this car directly from the City of Knoxville, TN where it served as a city fleet vehicle and as such has never served as a police cruiser.  There is no evidence of any police equipment such as Light bars, push bumpers, antennas, radios, cages, etc. being installed (other than the standard spot light).  Being a southern car all of its life there are no rust issues and other than minor paint flaking issues (which is typical of Fords of this era- see pics) it is clean and mechanically sound.  I spot painted these areas to prevent rusting and further flaking but like I said they are minor.  Everything works as it should, the transmission shifts smooth and the engine sounds and runs great with no leaks or noises whatsoever.  Cold A/C and it has 4 like new Goodyear RSA's that ride smooth and quite.  In my opinion this P71 appears to have lived an easy life so there should be plenty more to give.  Feel free to come and inspect it for yourself, e-mail me with any questions. Thanks for Looking!