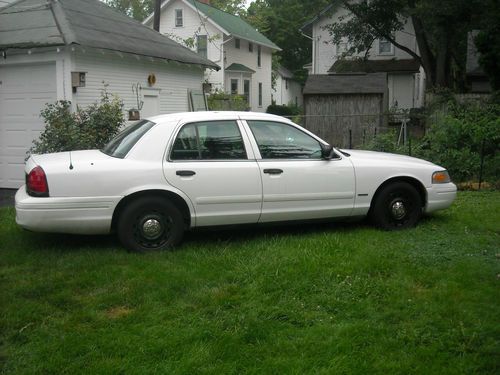 Condition: UsedA vehicle is considered used if it has been registered and issued a title. Used vehicles have had at least one previous owner. The condition of the exterior, interior and engine can vary depending on the vehicle's history. See the seller's listing for full details and description of any imperfections.Seller Notes:"This car has some dings and scratches but ZERO rust! Has a plugged hole in the roof panel from the light bar wiring."

Here I have a very nice, above average 2006 Ford Police Interceptor. Has been mine for the last 30K miles. I have maintained this car myself. Oil change every 3K miles, air pressure in tires checked, trans fluid, coolant etc.!

I bought it from a company which refurbishes these cars for towns and townships with a limited budgets. This car has a rebuilt trans, which has 2 years left on a national warrantee. The tires, Falken ZIEX ZE512's are new and speed rated to 120MPH. Newer brakes, newer lower ball joints and tie rod ends.

This one has cruse control and the overhead "Map" light. No rips or burns in the seats with no holes in the dash!

I am looking for a trade. I would like to have a 1960"s Ford Fairlane, Falcon, Ranchero, Econoline, Mustang ether 2 door or prefer a 4 door. This car MUST have a 6 cylinder and 3 speed manual trans ( I would consider an automatic) that I can use as a daily driver. It must have a nice presentable and complete interior, minimal rust and MUST be reliable.

I will also sell as well.

Thank you, Please ask any questions...This is a very nice car!